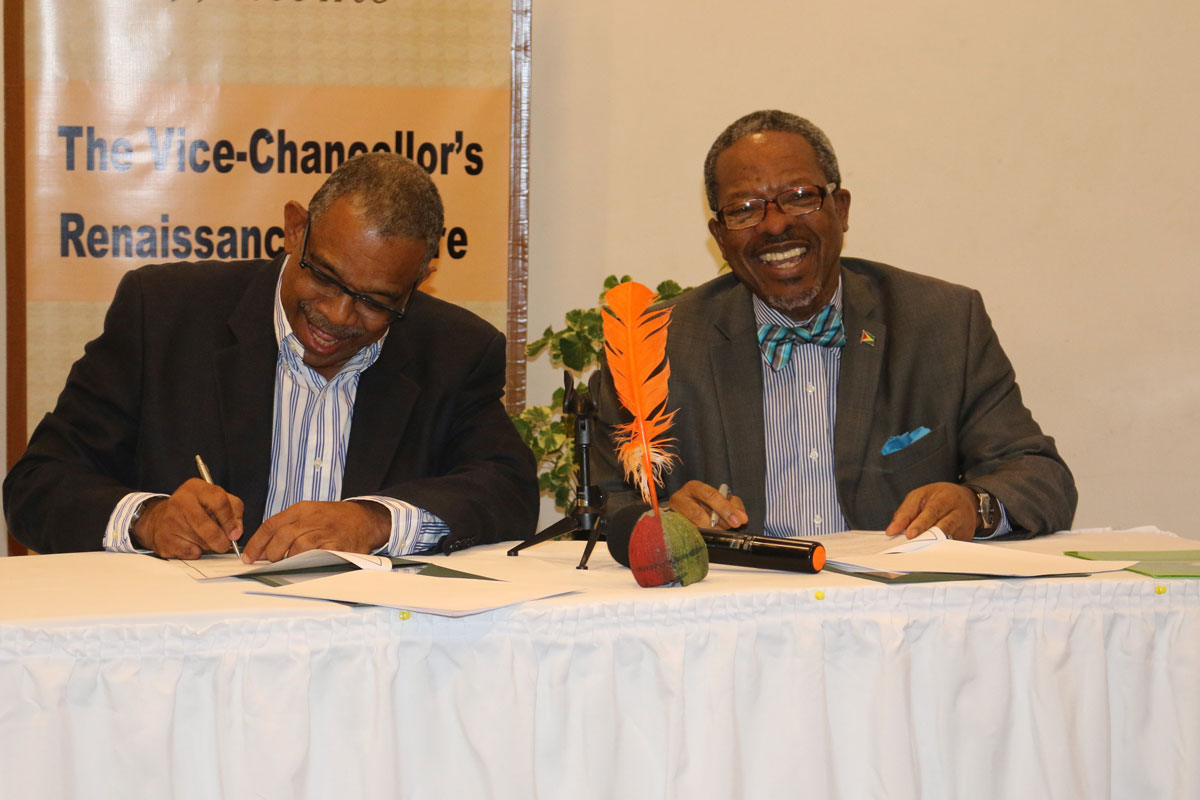 The University of Guyana (UG) and Ian Randle Publishers (IRP) of Jamaica signed an agreement on March 16, 2017 to establish The University of Guyana Press as the publishing arm of UG to create an outlet for the scholarly work of faculty and student researchers, as part of efforts to boost research and scholarship at the nation’s sole national university. The agreement takes effect on April 1, 2017, and will be in effect for an initial period of three years.

According to Vice-Chancellor Professor Ivelaw Lloyd Griffith, “the establishment of the Press is both history-making and an important part of enhancing the brand of the university. It is an integral part of my Renaissance vision for our university.” The University of Guyana attaches great importance to this collaboration with IRP, which is the largest scholarly and commercial publisher in CARICOM.

The agreement was signed on behalf of the university by Vice-Chancellor and Principal Ivelaw Lloyd Griffith, and IRP Board Chairman Ian Randle signed on behalf of IRP. The ceremony took place in Herdmanston Lodge, Georgetown, at the end of the presentation of the second Vice-Chancellor’s Renaissance Lecture which was delivered by Mr Randle on The Publishing Pillar of the Renaissance Bridge. Present for the historic occasion was Professor George (Ken) Danns of the University of North Georgia, who accepted the Vice-Chancellor’s invitation to serve as the founding chair of the International Editorial Board of the Press.

Both UG and IRP noted their intention to actualise the agreement fully to ensure the publication of deserving works by university faculty and students as well as scholars in the Diaspora, especially on matters related to Guyana and the Caribbean. Both Vice-Chancellor Griffith and Chairman Randle are committed to having the first UG Press titles available before the end of 2017.

In his remarks at the event, Vice-Chancellor Griffith announced that the Press will publish both books and journals, including Transition, a journal that has had a troubled publication history, and at least two new ones. He has in mind a Journal of Entrepreneurship, to link with the proposed School of Entrepreneurship and Business Innovation, and a Journal of Diaspora Engagement, as the scholarly arena of the proposed Regional Center for Diaspora Engagement.

Mr Randle also gifted the University Library with 200 books, worth US$15, 000. The Vice-Chancellor received the donation on behalf of the University. He thanked the IRP Chairman for his kind expression of personal friendship and institutional support. He noted that “not only is Ian a friend of long standing and the publisher of my seventh book, but he is committed to enlarging the educational boundaries of Caribbean people through the availability of educational and popular material.”

The Vice-Chancellor seized the opportunity to present Mr Randle with the instrument of appointment as an Education Resource Ambassador of the university. Also inducted as a UG Ambassador was Ms Roxanne Reece, Director of Fly Jamaica, which was one of the co-sponsors of the Renaissance Lecture.