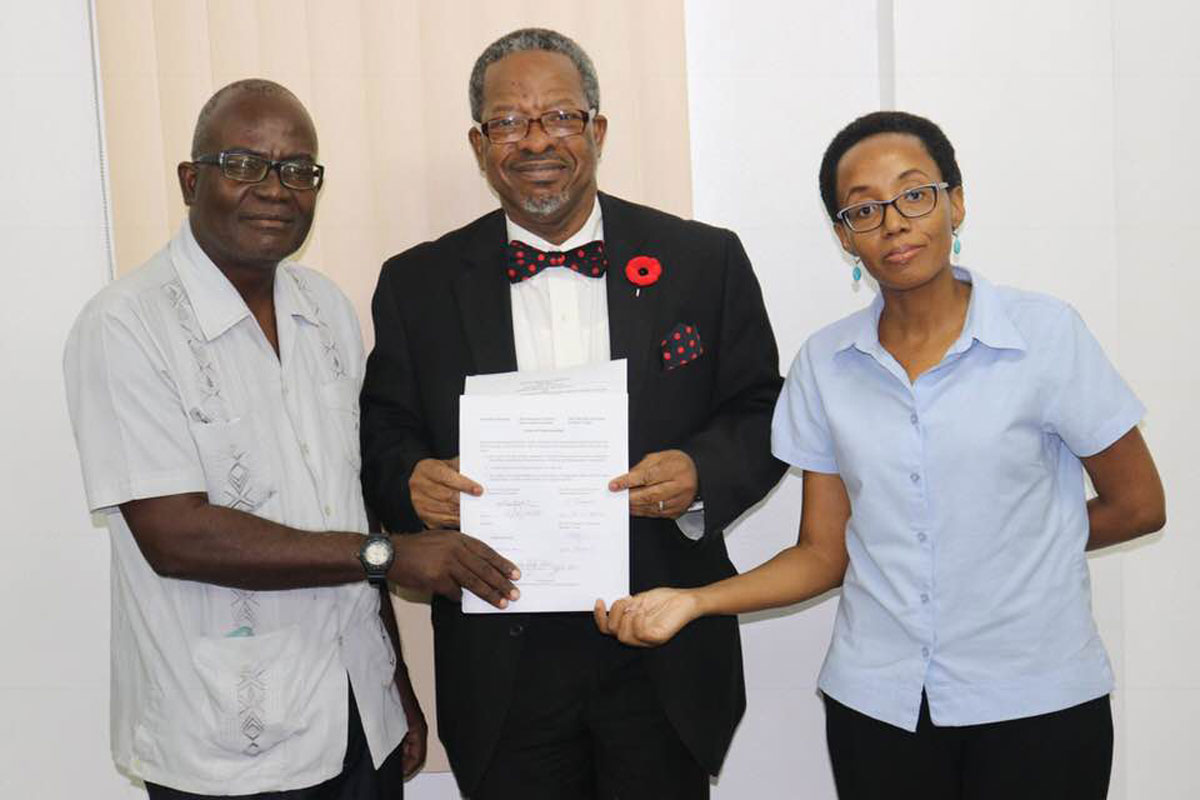 In addition to the Memorandum of Agreement, which covers the salary increase and stresses the importance of performance, the officials signed a Letter of Understanding which addresses the issues of timely grade submission and the design and implementation of a new performance management system. The signing of the two documents occurred on Tuesday, November 21, 2017. Vice- Chancellor Professor Ivelaw Lloyd Griffith represented the University Administration, Dr Jewel Thomas, President of the UGSSA, signed on behalf of her union, and Mr Bruce Haynes, president of UGWU, signed on behalf of that body. The event took place at the Ministry of Social Protection, and was witnessed by Ms Karen Van Sluytman, Acting Chief Labour Officer. Also in attendance was Mr Lincoln Lewis of the Guyana Trades Union Congress, who was instrumental in securing the settlement.

The Agreement and the Letter pave the way forward as it relates to overall performance of all staff members, particularly the submission of grades by the teaching staff. The timely submission of grades has been a perennial issue at UG, and the Administration has sought the support of the Union to remind its members of their obligations to our students. The Administration acknowledges the tremendous work done by most staff members and is committed to ensuring improved service delivery by all staff. Thus, the deadline for submission of all outstanding grades has been extended to December 1, 2017. Staff who will not have met their obligations by then will not receive salary increases.

The stage is now set for some seven hundred (700) full-time and part-time academic and non-academic staff at the UA Level to receive an increase of six (6) percent across-the-board in their December salaries, as well as payments retroactive to January 1, 2017. As with the agreement signed on November 8, 2017 with the UGWU, the offer from the Administration was made in the context of what is affordable, in keeping with the mandate from the University Council, and it stresses the importance of performance.

Vice-Chancellor Griffith noted, “Today’s signing also sets the stage for a new normal at the university, where performance is just as important as payment, and where accountability and affordability are key to enhancing educational entrepreneurship.” Further, he reiterated that, “as regards affordability, these increases are not our only financial obligations. We still have an average of 4.5 percent merit award to

fund, as well as allowances for traveling, entertainment, and academic materials. We also have to cater for study leave (salary and housing for three months), sabbatical leave (salary and housing for 12 months), leave passage, and responsibility allowances for Coordinators, Heads, and Deans. I am delighted that we are able to close this chapter and begin paying the increases”.