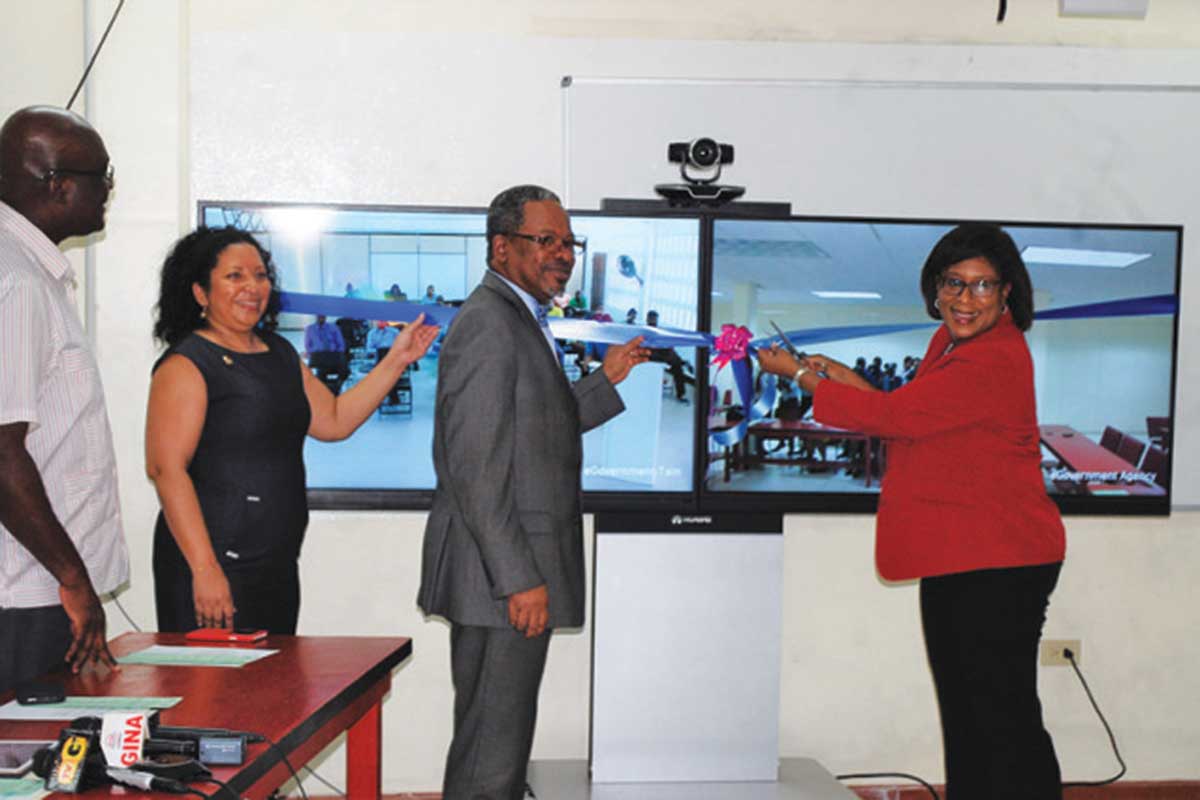 Students from the University of Guyana’s Tain Campus can now access courses offered at the University’s Turkeyen Campus without leaving Berbice. This is now possible with the launch of the Teleconferencing Platform, which connects the two campuses.

UG, in collaboration with the Public Telecommunications Ministry, on Monday launched the Teleconferencing Platform at the Centre for Information Technology (CIT), Turkeyen Campus.

Vice Chancellor, Professor Ivelaw Griffith said the Platform, donated by Huawei – a China-based company, was just one step towards connecting the University’s campuses. He added that he intended to push the envelope of engagement not only within and between the classrooms, but also in the communities for wider participation.

Public Telecommunications Minister Cathy Hughes said Government wanted to ensure there was more connectivity between the country’s premier tertiary institution and other stakeholders. “Today, we are celebrating the operation of our teleconferencing facility, which has been given as a gift to UG, and from a macro perspective, this teleconferencing suite is one more step in the march towards creating a higher level of digital connectivity for all citizens of Guyana,” she said.

“…where we are hoping to take Guyana as a country means that we want to ensure that we can provide, as a Government, more and more digital services online,” Hughes added.

The Minister revealed that it was hoped that birth registration, passport and driver’s licence applications would be available online since that would be more efficient and less time-consuming. Minister Hughes underscored the importance of the teleconferencing suite, noting that it would allow students from the Tain Campus the opportunity to take courses only offered at the Turkeyen Campus, without the hassle of travelling back and forth between Berbice and Georgetown.

“With the use of technology we recognise that we can connect distant locations and that, of course, makes it easy for individuals, for students, for teachers in our society and communities to be able to connect. This equipment was a gift from Huawei and they actually presented this to Guyana since 2013. We are excited; I am excited, that finally with the help of capable staff at the ICT [Information and Communications Technology] Department here at UG and with my staff they’ve made the commitment – that guess what? although the instructions for assembling this unit is actually in Mandarin, they decided that they would put their heads together and they have delivered,” Hughes commended.

She also revealed that the unit would be powered by the Ministry’s e-Government Unit. Hughes added that through the e-Governanace Agency, they have been able to connect 84 schools, 20 educational institutions and created some 56 ICT hubs.