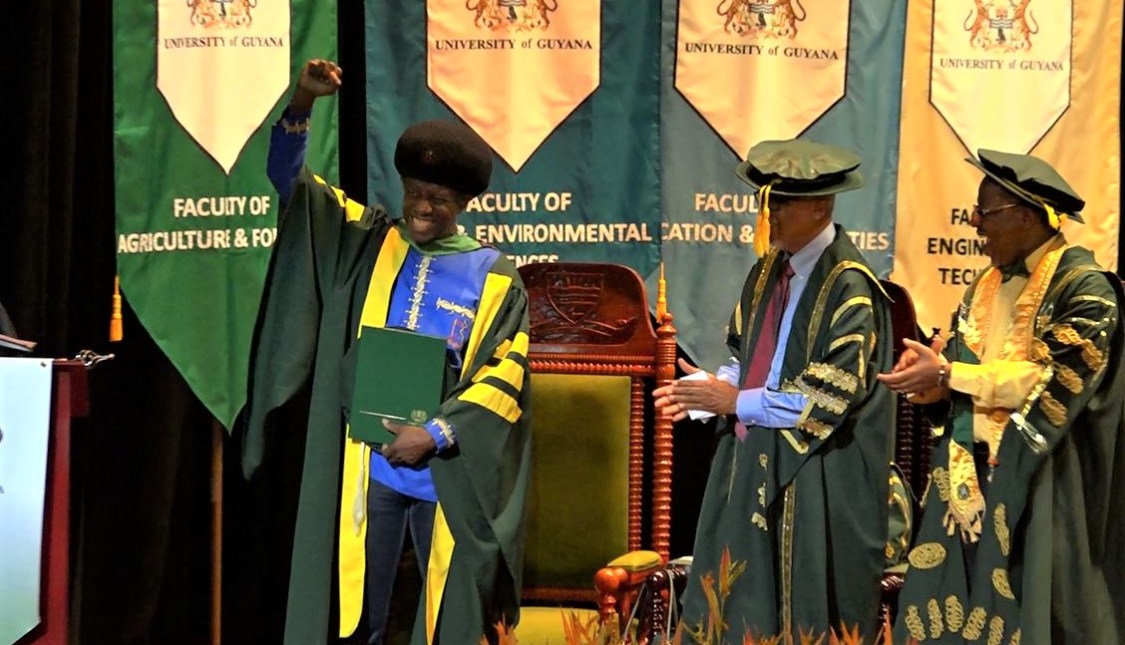 Recipients of Honorary Doctorates advocate for end to racism

Dr. Eddy Grant proudly acknowledged his achievement as Chancellor and Vice Chancellor of the University of Guyana applaud

The writer and producer of the famous song “Electric Avenue,” was the first of the four persons conferred with Honorary Doctorates by the educational institution during its 52nd Convocation ceremonies on Saturday.

Accepting his accolade, the famous Guyanese artiste jokingly said he had always wanted to be a Doctor.

“My father always said I would be a Doctor…I was over fifty and my father still says there will be a way, you can’t whine forever!” he recalled, noting that “now I have satisfied the spirits that drives me.”

He took time to thank his wife of 50 years, mother, his deceased grandmother, his brother who is also a singer, Rudy Grant and residents of the village of Plaisance on the East Coast of Demerara, who all helped to raise him as he reflected on how close-knit the community was back then.

“I learned from the real people,” Eddy Grant said.

The creator of his own Caribbean form rhythm called Ringbang – a concept which encourages humans to stop being insular – Grant used the stage to call on Guyanese to abandon racial discrimination.

It is a “sickness” he said, in the local society where everything is premised on race.

The Plaisance born musician also called for greater collaboration among all race and strata of society.

“Read, communicate and respect each other and in time, Guyana will be a nation,” Grant said.

The ‘Gimme Hope J’oanna’ singer also called on the University to offer courses that cater for those “who are not gifted with intellectual capacity,” but can work with their hands.

“You can’t all be Lawyers and Doctors,” he said as he spoke of the need for more technical persons to serve the various industries that lack skilled persons.

“We must, Vice Chancellor, somewhere in this august society that you call University of Guyana, make available some space that those who are not gifted with intellectual capacity … can master the elements, the compounds to bring about a great social renaissance in Guyana so much that we can export it,” Grant said.

On the recommendation of the University of Guyana Academic Board, the University Council adopted the proposal to confer the university’s first honorary doctorate degrees this year.

The second recipient of this outstanding achievement is also a distinguished gentleman who is well deserving of the title.

Moving from his first job as a rat catcher in the Diamond Estate to a Banker, Chartered Accountant and a Merchant among other outstanding titles, Dr. Yesu Persaud was fondly described as “the saint who sells rum,” by UG’s Registrar, Dr. Nigel Gravesande. He was awarded for his iconic leadership in business and banking.

“He sold the world known rum without being intoxicated,” Dr. Gravesande noted as he gave his tribute to the businessman he described as “incorruptible” and “pure as gold.”

Dr. Persaud, no stranger to awards, told those gathered: “Nothing happens unless you make it happen,” as he delivered his acceptance speech to a packed audience at the National Cultural Centre.

Like his Honorary recipient before him, the businessman made a plea for an end to racism.

“Isn’t it time we all call ourselves Guyanese?”

“If we want to build a nation, we have to work together,” he said.

Dr. Persaud, known as one of the most outspoken local businessmen, pioneered the Demerara Bank Ltd., Diamond Fire and General Insurance Inc. and Trust Company (Guyana) Ltd., the Institute of Private Enterprise Development (IPED) among many others.

The other two recipients were Jairaj Sobhraj for Excellence in Entrepreneurship and Philanthropy and Laura George for Outstanding Community Development and Advocacy. Laura George moments before being conferred with her honorary doctorate. (DPI photo)

George, pioneer of the Amerindian People’s Association (APA, charged the University to commit to strategically and significantly undertake its role as the independent academia to produce correct information on the history of Guyana.

Mr. Sobhraj, founder of the Jay and Sylvia Sobhraj Foundation and an outstanding Philanthropist, in his acceptance speech thanked his family for their contributions to his achievement. Recipient of an Honorary Doctorate, Jairaj Sobhraj, takes a knee to allow Registrar of the University of Guyana, Nigel Gravesande, to complete his robing as Vice Chancellor, Professor Ivelaw Griffith, looks on. (DPI photo)

The Jay and Sylvia Sobhraj Foundation is a charity organization which is building a modern centre for Behavioural Studies and Research at the University of Guyana’s Turkeyen Campus.

A total of 1,739 students graduated from the University of Guyana on Saturday in three ceremonies at the National Cultural Centre.