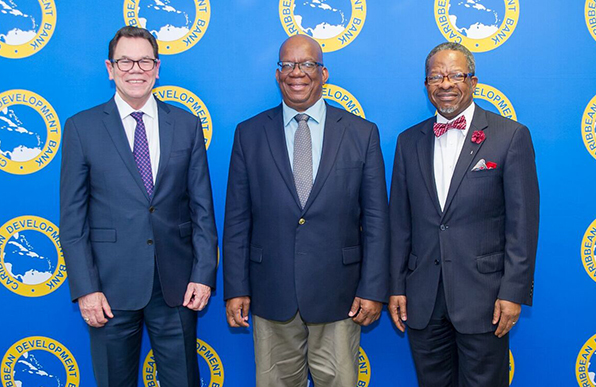 Gov't signs on to CDB grant for UG library

Minister of Finance, Winston Jordan on Tuesday signed a Technical Assistance Grant with the Caribbean Development Bank (CDB) for the infrastructural enhancement of the University of Guyana’s library. On March 1st this year, the University of Guyana (UG) and the CDB had signed a separate agreement on the initiative. A release from the Ministry of Finance yesterday said that other signatories to the agreement were President of the CDB Dr Warren Smith, and the Vice Chancellor of UG, Dr Ivelaw Griffith.

The US$149,985 ($31.4m)  grant was approved by the Board of Directors of the CDB at its Annual meeting held in March this year. It will finance a comprehensive assessment of, and prepare final designs and scost estimates for the construction of a modern, “gender-responsive, socially-inclusive and environmentally resilient facility”. This grant will also help to   tackle the adequacy and suitability of the current infrastructure. The new library will be sited on a plot of land west of the current library. The Government of Guyana and UG will contribute approximately US$26,000 towards the full realization of the project. Over the years, the release noted that UG has had difficulty accessing funds to maintain the present library, its other buildings and to build newer buildings to accommodate  its growing student population. Despite this, the release said that UG has made incremental changes to the library including the removal and disposal of asbestos from certain areas in 2009; the building of a fire escape in 2010; the renovation of the roof of the new wing of the library and the grilling of windows in the general reading room in 2012; the rewiring of the library in 2015 and the physical upgrade of the learning resource centre in 2017. However, the release said that the library still suffers from infrastructural challenges and weaknesses in staff capacity.

The infrastructural enhancement project which will start immediately will be executed by UG through the Office of the Deputy Vice-Chancellor, Planning and International Engagement. A Project Steering Committee will have responsibility for the coordination and overall guidance of the project. In March, when the UG/CDB agreement was clinched, UG  Librarian, Gwyneth George said the new building will have a layout which caters for both collaborative and independent spaces She explained that in designing the building UG will focus on incorporating technology in such a way that both a space for learning and creating will be realized.