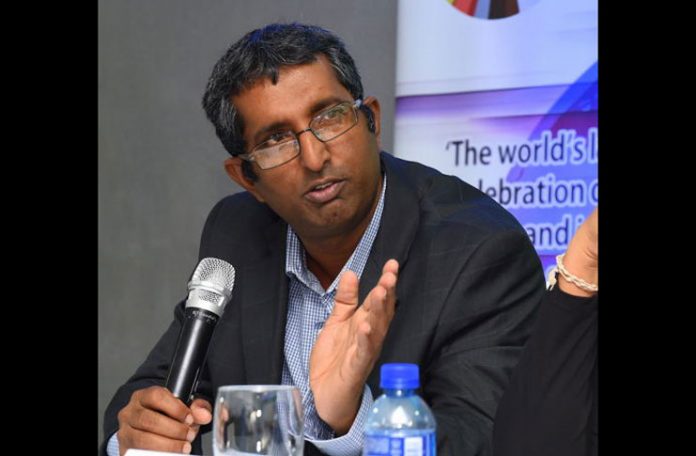 By Carl Croker
“ONCE Brian Lara left the team, the faults in the West Indies team showed up” says Dr Roger Hosein, who used the analogy to explain what happens when oil-rich states pay little attention to its other industries.

Dr. Hosein was at the time giving the feature address at the second Clive Yolande Thomas distinguished lecture held at the Herdmanston Lodge on Thursday.
The Senior Lecturer and Coordinator on Trade and Economic Development Unit at the St. Augustine Campus University of the West Indies, was at the time discussing the topic “Critical considerations for the economic success of Guyana in the context of its pending petroleum boom”.

Dr. Hosein was quick to point out that booming factor of production can allow structural flaws to go unnoticed and cause things to look nice and glossy at the surface causing you to relax.
He explained that a boom in the economy would cause workers to leave other sectors and move towards the booming sector.

“Because of the boom in the energy sector, some workers would leave sectors such as construction, gold mining, and timber to join the oil sector because they will get better salaries there,” he said.

ADVANTAGEOUS POSITION
He admitted that this trend has been experienced by oil-rich economies worldwide, but that Guyana is in an advantageous position to guard against this premature contracting of the non-booming tradable sectors since it has models to follow and the time to put in place measures to address shortcomings.

“The non-booming tradable sectors losing their share of GDP prematurely become a real issue later when you turn to that sector for export revenues, only to find that they have been decimated. It is like looking for the West Indies team to perform after Lara exited and there was no plan to prepare the rest of the team, they placed all their dependence on Lara to carry the team,” he said.

He said the money gained from oil will generate much infrastructural development and expansion by government and the private sector such as seen with the Pegasus Suites construction. Such activities, he said, will help to circulate money.
“This will lead to a resource movement in the economy that will lead to a rise in wages. And in order for non-oil sectors to keep workers from leaving, they would have to raise salaries,” he noted.

He, however, warned that spending of the resource boom money by the state and oil workers in Guyana will trigger an increase in the price of things.
This, he cautioned, will cause the country’s real exchange rate to appreciate, making it easier to import. “The marginal propensity to import will rise as the domestic production capability will fall,” he warned.

Government’s strengthening and sustaining of the non-oil sectors was highlighted as a critical consideration for the economic success of Guyana in the context of its pending petroleum boom.