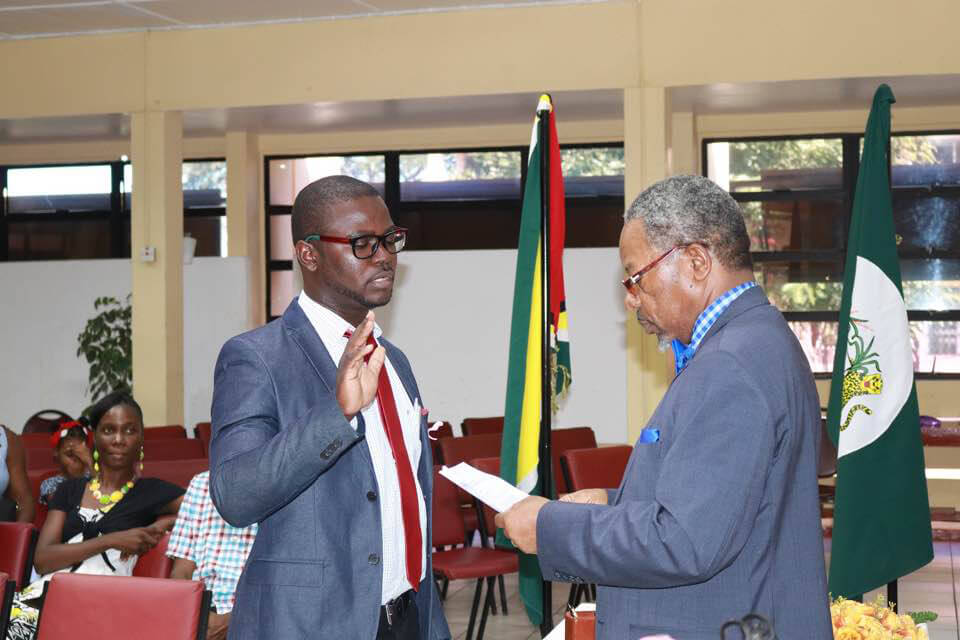 The new Executive Body of the University of Guyana Students’ Society (UGSS) was on Friday installed and Vice Chancellor, Professor Ivelaw Griffith, charged the body to keep their constituents informed of new developments.

“Keep in communication with your constituents that you represent. They would not all be able to be in one place at one time… Keep them informed and enable them with the information to separate fiction from facts,” Griffith urged, during his address to the executive body.

Newly elected president Norwell Hinds and his executive council were administered their Oath of Office by Professor Griffith.

During his address, Griffith told the council that while they are in a leadership position they must stay focussed on their studies and keep “their eyes on the prize” alluding to graduating from the tertiary institution. He also urged the students to find the balance between their academic and social lives, noting that serving in a leadership position forces “you to make tough decisions.”

Registrar of the university Nigel Gravesande in his remarks challenged the new council to help develop coherent values and ethical standards, forge educational partnerships with other institutions to advance student’s learning and to build supportive and inclusive communities across the two campuses and four Institute of Distance and Continuing Education Centres.  He further challenged the executive to use the resources at the university to effectively achieve institutional missions and goals, engage students in active learning and work to improve student performance.

Meanwhile, Hinds in his inaugural speech said that during the term, his team would be focused on representing all students and using their platform to advocate for student leadership and advocacy, help students in need and bring immediate relief to for students.

In addition, he said that they would work to mobilize resources for students and ensure that the UGSS is effectively managed with good governance.

“We must be able to commit our talent and resources not only for advocacy but immediate relief for students,” Hinds said.

At the end of his presidential term he said he would like to see the “successful completion and opening of the student complex with it being fully furnished.” He also stated that the council is proposing to host two major events; Inter-campus Varsity Games which would bring together all tertiary Institutes, and a major conference called ‘Solve Guyana’ in partnership with the administration.

He added that these goals would not distract the council from working for their constituents as representing them is a priority.

He also called on businesses to support the student council as he believes they would be able to benefit from additional revenue.

Hinds and the new executive student body council were elected on the 27th of September. 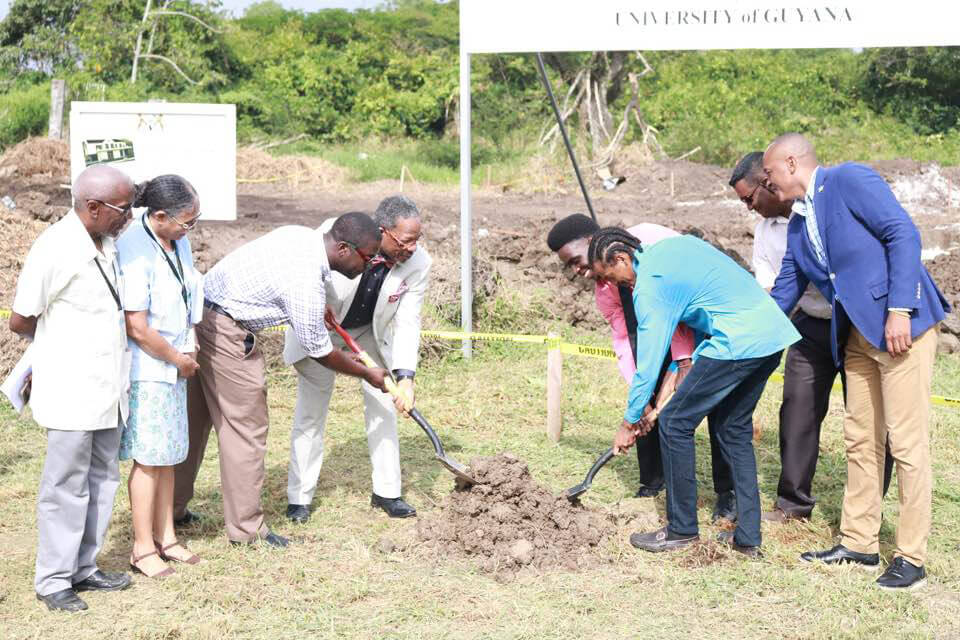 The University of Guyana (UG) on Wednesday held a ceremonial turning of the sod for the proposed Student Society Complex Building at its Turkeyen Campus.

According to a Department of Public Information (DPI) report, the building is currently being constructed by M & P Investments on the southern section of the Turkeyen Campus. It is expected to be completed in February, 2018.

UG Vice-Chancellor Ivelaw Griffith explained that it was through the persistence of the past students’ leadership that the $60.6 million, 7,650 square ft, two-storey building would become possible. He was optimistic that the student body will make full use of the facility upon it completion, the report stated.

“I am hoping that two things happen; that the students, who are going to be beneficiaries of the hard work and investment, use this facility appropriately; [and] my second request is the incoming president and leadership find ways to reestablish the vibrancy of student life,” the report quoted him as saying.

According to the release, the incoming president of the University of Guyana Student Society (UGSS), Norwell Hinds, also commended the past student leadership’s efforts and the administrative body for the initiative.

“This student complex stands historically and symbolically at a particular juncture of transformation and transition for the university and the student society. We are particularly pleased to build upon the legacy of past presidents of the UGSS and to congratulate the administration for its efforts in this particular transformation,” the report quoted Hinds as saying.

Outgoing president Ron Glasgow highlighted that in previous years, the student population was deprived of certain benefits, since the campus lacked a student complex. He applauded the administrative committee’s support for the project.

The sod-turning ceremony saw the attendance of past UGSS presidents, who shared their views on the construction of the complex, according to the report.

Following intense discussion, the March 30 extra-ordinary meeting of the University of Guyana Council, chaired by Chancellor Eon Nigel Harris, voted to increase tuition fees. In making the decision the Council examined the University’s projected budget deficit, the pressing needs of the University, and projected alternative income streams. Comparative data on private high schools and Universities in Guyana and the Caribbean region were examined and the tuition and fees at all the institutions examined were found to be several times higher than those of The University of Guyana (UG). Even with the unavoidable adjustments, fees at UG will still be comparatively lower.

The Council decision will be applied to tuition fees for all programmes and for both continuing students and new students for the 2017-2018 academic year. However, input from the Student Society was considered, leading to an incremental roll out, where continuing students will now pay an increase of 15% (about G$2500 a month), and new students will be required to pay 18% (about G$3000 a month) more. The Council also decided to incrementally increase the tuition fee by 10 % for 2018-2019 academic year for all students, and a further 10% for all students for 2019-2020.

At the same meeting, the Council also authorised the UG Administration to commence negotiations with the two University Unions for remuneration packages based on what the University could afford. The Council received clarification from the Ministry of Finance that the claim by the unions that the Government of Guyana had provided a fixed sum of money for salaries, which would amount to a 15 percent salary increase, was inaccurate. In this context, the UG Administration will continue to analyse the University’s budget to determine the fullest possible extent of affordability. It also was stressed that staff performance will be a key factor in determining salaries and benefits, whether monetary or non-monetary.