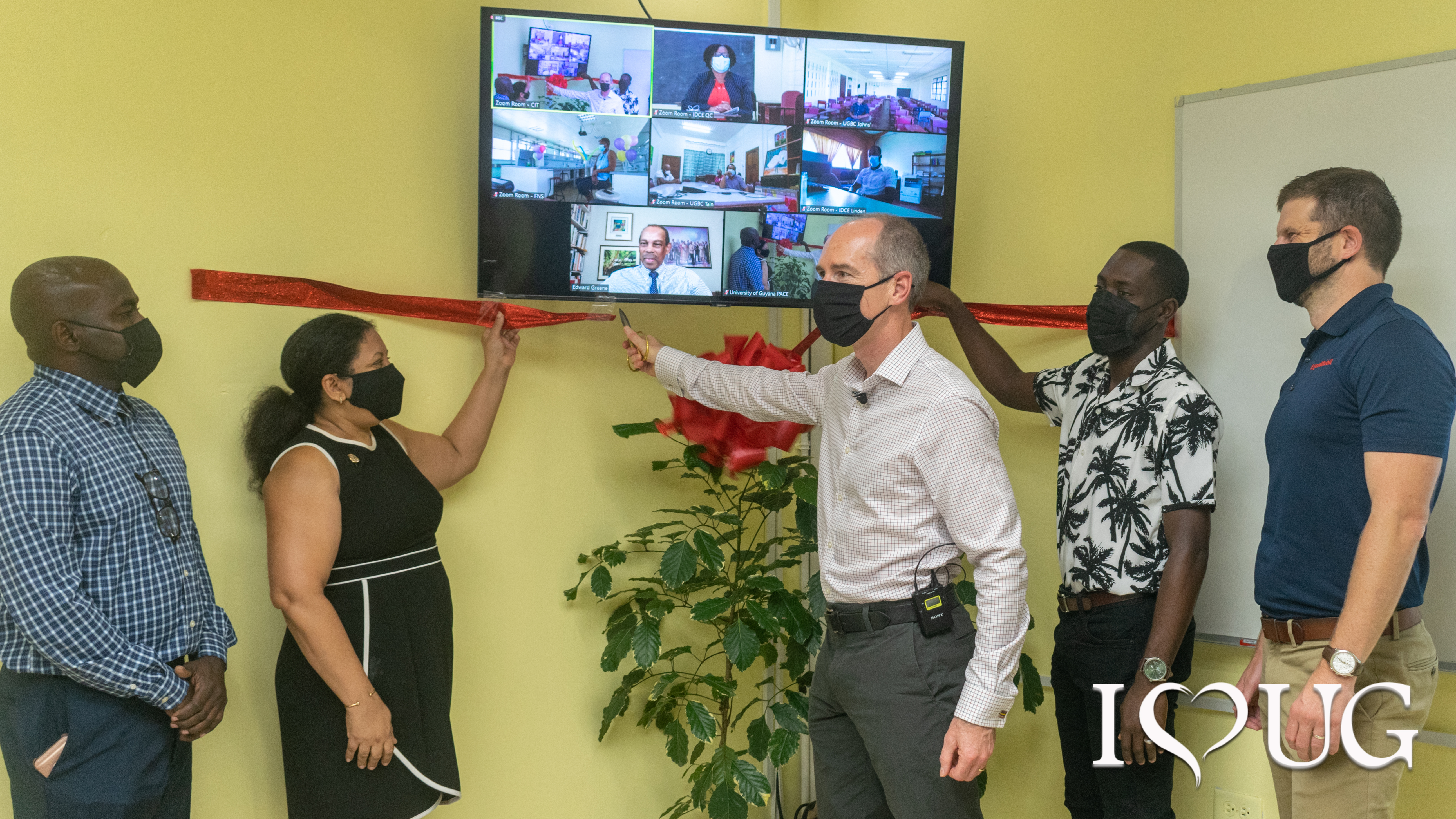 (Georgetown/Guyana/DECC/The University of Guyana/April 11, 2021) The University of Guyana in a simple ceremony on Saturday, launched its ZOOM Room project laying down the first building blocks of its blended-learning architecture, which they say prepares for the impending future and begins to fulfil their first aspirational goal of producing at least 1 graduate per Guyanese household.

The 18 rooms will service 18 different locations across the University’s 9 campuses in Georgetown, Linden, Berbice, Bartica and Anna Regina enabling live classrooms to be broadcast to anywhere with a strong internet connection.

Six ZOOM Rooms likened and demonstrated today included 1 at Tain Campus in Berbice; 1 at IDCE Johns’ Science Centre in Berbice, 1 at the IDCE Centre in Linden, 1 at IDCE Centre in Georgetown and 2 at the University’s Turkeyen Campus - 1 at Natural Sciences chemistry lab and the other at the Centre for Information (CIT).

Director of UG’s Tactical Online Services (TOS) Malcolm Williams performed a demo to show how the ZOOM Rooms work and was able to link all six Rooms explaining that students will now be able to benefit immediately.

He explained that ZOOM Rooms are specially enabled rooms from which live classes can be viewed in an interactive way by multiple participants in multiple remote areas.

ZOOM Rooms are examples of UG leveraging appropriate technologies. The ZOOM Rooms will (1) implement planned, and enhance existing, initiatives that enrich the quality and impact of the delivery of tertiary education, and (2) expand the reach of UG’s instructions and the capacity of its classrooms, through facilitating hybrid - in-place and remote - mode of education. The latter is consistent in keeping with the University's vision.

The initiative is part of a gift under the Stabroek Block Co-venturers Greater Guyana Initiative (GGI) to the tune of US$70,000.

Speaking via link from Washington DC, during the launch, Chancellor of the University Professor Edward Greene congratulated the UG Teams for conceptualizing and executing the highly complex technical project.

Chancellor Greene further noted that the ZOOM Rooms are a critical and dynamic tool for enhancing the conferencing and blended learning operations for UG and expressed appreciation to ExxonMobil Guyana and partners for supporting the initiative.

“I extend appreciation to ExxonMobil, CNOOC and Hess for the Greater Guyana Initiative (GGI) out of which this significant gift has been made possible and for the cooperative spirit in which they so willingly partnered in making this venture a reality”.

“I commend Mr. Alistair Rutledge, President, ExxonMobil Guyana and his team for their willingness to invest in the human development capital in our University that will in turn contribute to the development of Guyana. I offer best wishes to the Vice-Chancellor Professor Paloma Mohamed Martin and the Senior Management Team for their vision for ensuring that the Faculty, staff, students and friends of this university community stand to benefit from this transformative moment,” the Chancellor said.

He added: “I am intrigued by how this investment in the ZOOM Rooms is indeed an investment in human resource development that would drive engagements for student, staff and citizen success and at the same time deliver measurable results, so well-articulated in UG’s evolving Blue Print 2040”.

In her brief remarks, Vice-Chancellor Xi Professor Paloma Mohamed Martin recalled that the original mission of the Project when it was first negotiated by the Office of Philanthropy and Civic Engagement (PACE) in 2019 was to establish a digital information room to serve as a central space and operations centre to facilitate local and international teleconferencing meetings, virtual classrooms instructed from universities outside of Guyana, and a data bank
facility and was intended to cater for 30 persons per session.

However, the VC explained that in 2020, the University’s vision was modified in response to the needs created by extended Covid-19 conditions, the funds were repurposed, and project re-
designed to create 18 ZOOM Rooms across the University of Guyana system with an in-person capacity of over 150 instead of 30.

The VC noted that one of the challenges in higher education across the world, is how to manage those courses that have a practical component to it. However, she highlighted that one innovative way the University is using the technology is to place the facility in labs so that during periods requiring distancing, students who are out of the labs can still be remotely immersed in the process and so still also benefit from what is happening. The rooms will also assist with any physical space issues that would have to be managed in a foreseeable future that will still require some level of physical distancing.

President of Exxon Mobil Guyana Alistair Routledge in his remarks said his company was delighted to work in partnership with the University of Guyana on the project, noting that while it is the first of the Greater Guyana Initiative, it’s not the first project ExxonMobil is involved in with the University.

He said: “We work hard to find through exploration and develop, and monetize the resource of the country offshore. That transformation will drive the transformation of the economy. But the University of Guyana plays that critical role of transforming the education system and building the capacity of the country to really deliver a sustainable economy. I think there’s a clear partnership, one that we are very happy to enjoy and one that is growing in the future,”
Routledge noted.

“The blended learning is a great initiative and these are tools we had before the pandemic, but again the adversity is the mother of invention and here, we are realizing how much we can utilize the hardware facilities we have, the laboratories we have available to us to make learning more inclusive across the country and more accessible, which I know is a big part of the Blueprint 2040 and is an ambition that we have too that the wealth is generated from what we
do and benefits the whole country and not just the people that are closer to the main centers of activity on Georgetown,” Routledge expressed.

Director of the Institute of Distance and Continuing Education Dr Jacqueline Murray noted that the ZOOM Rooms will enable the Institute to reach students far and wide as it was unable to do before and will help in the expansion of its course offerings.

Director of Berbice Campus Prof. Gomathinayagam Subramanian expressed appreciation to ExxonMobil for their generosity in providing the majority of the funds for the initiative and noted that students and staff of the Campus are very grateful as it will make learning easier for them due to the Covid-19 pandemic.

On hand to give the vote of thanks from locations in Linden and Berbice were members of the present University of Guyana’s Student Union Marissa Foster and Daniel Anthony, while

President of UGSS Jafar Gibbons was on hand to help cut the ribbon along with the Vice- Chancellor and President of ExxonMobil. The students extended sincere gratitude to

ExxonMobil, CNOOC and HESS for the Greater Guyana Initiative which has made this significant gift possible. Special thanks were extended to President of ExxonMobil Guyana Mr. Alistair Routledge and other officials of the company including; Matt Scharf, Karen Matisse, Kimberly Brasington, Suzie DeAbreau and Nick Yearwood.

UG’s PACE team led by Christine Chowargir, the TOS team led by Malcom Williams, Mr. Bjorn Williams and staff of the Maintenance Department were also thanked for their magnificent arrangements in making the launch of the Zoom Rooms a success and for their future work in further developing the platform. The event was also viewed remotely by several persons linked via several different types of devices in several locations, demonstrating the
flexibility of the technology and its innovative deployment by UG.

The University of Guyana is the 58th year state University of Guyana. It offers 136 programmes in over 60 disciplines online and face-to-face in 8 campuses across Guyana. With a student population of now 10,000, UG has provided education, learning and research for over 50,000 alumni. The mission of the University is to discover, generate, disseminate and apply knowledge of the highest standard for the service of the community, the nation and of all mankind within an atmosphere of academic freedom that allows for free and critical inquiry. UG’s forward thinking Blueprint 2040 is currently setting the course for the University’s future design and institutional response to the changing needs of
Guyana.