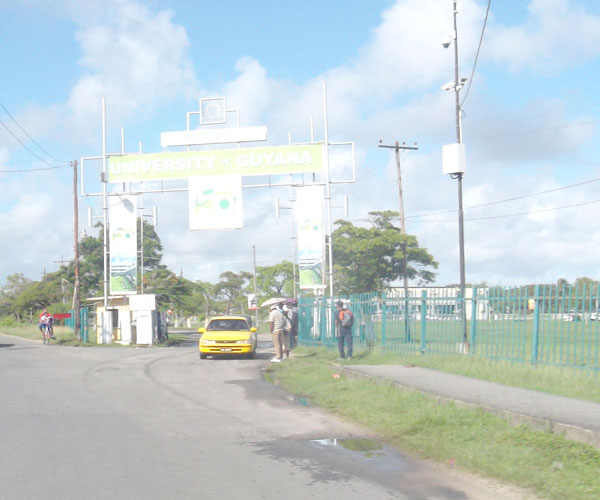 At its convocation ceremony set for Saturday [November 10, 2018], the University of Guyana [UG] will graduate its first batch of students from its School of Entrepreneurship and Business Innovation [SEBI].
The School was launched in 2017 and, according to information released by the university, the prospective graduates, at the time, were Third Year students in the Faculty of Social Sciences pursing programmes that were transferred to SEBI.
This weekend, the university will graduate its first batch of students from 12 different programmes.
From the Faculties of Health Sciences will be the Diploma in General Psychology, Master of Medicine-Emergency Medicine, Master of Medicine-Family Medicine, Bachelor of Science-—Medical Rehabilitation—-first batch of student to graduate with the option in Speech, Language Therapy and Audiology.
From the Faculty of Engineering and Technology will come the Associate of Science in Industrial Engineering – previous batches did the Certificate and Diploma. Not to be left out is the Faculty of Natural Sciences, with the Associate of Science in Computer Science – previous batches did the Diploma.
Natural Sciences also will graduate it first Associate of Science in Information Technology, Bachelor of Science in Information Systems, Bachelor of Science in Information Technology and Associate of Science in Biology – first batch from the Turkeyen campus.
The Faculty of Social Sciences will produce its first Bachelor of Social Science in Business Economics.
Unlike the two ceremonies which marked the convocation last year, students will graduate with Master’s and Bachelor’s degrees, associate degrees, diplomas and certificates at three ceremonies planned for the National Cultural Centre.
A total of 1,600 students will graduate from 116 academic programmes in UG’s eight academic units—the Faculties of Agriculture and Forestry, Earth and Environmental Sciences, Education and Humanities, Engineering and Technology, Health Sciences, Natural Sciences, Social Sciences and the SEBI – will be honoured at the ceremonies.
The first ceremony will be held at 9:00 hours, and will feature the Faculties of Agriculture and Forestry, Earth and Environmental Sciences and Education and Humanities, with the graduation address delivered by Professor David Phoenix, Vice-Chancellor of London South Bank University, one of the leading British universities with which UG is developing relations.
The second ceremony, for the Faculties of Engineering and Technology, Health Sciences and Natural Sciences, will be held at 13:00 hours. The feature address, there, will be delivered by Guyanese-born Professor Norman Munroe, Director, Office of Student Access and Success and of the Centre for Diversity in Engineering and Computing at Florida International University.
The largest of the three ceremonies will be held at 17:00 hours. It will involve the Faculty of Social Sciences and the SEBI – the two largest units of the university. The keynote speaker there will be Attorney-at-Law Mr. Kamal Ramkarran, a University of Guyana alumnus of the Class of 1997, who is a Partner at Cameron and Shepherd, one of the nation’s leading law firms. Ramkarran is serving his second term as President of the Guyana Bar Association.
Additionally, as part of continuing efforts to embrace the alumni, the University will continue to spotlight alumni at the various convocations.
Ms. Sara Bharrat (Class of 2015), Mr Dellon Fraser (Class of 2011) and Ms Nelsonia Persaud-Budhram (Class of 2010), will offer words of wisdom to the prospective alumni at the Turkeyen ceremonies, while Ms Somattie Sayrange (Class of 2002, 2004, 2009) will speak at the Berbice campus when it holds its 17th Convocation.
The President’s Medal for the best graduating bachelor’s degree student will be among numerous awards and prizes presented at the university’s 52nd Convocation. Additionally, two new awards will be presented from this year.
The Francille Griffith Award for Excellence in Nursing will be presented to two outstanding nurses pursuing their Bachelor’s degree in nursing in the Faculty of Health Sciences.
The award valued at $50,000 each, will be offered annually to a third year and a graduating student.
The second new award is the Dr. Cyril Solomon Prize for the student with the best overall performance at first attempt at Applied Microeconomics, Applied Econometrics, Labour Economics I, and Labour Economics II, which were courses taught by the late Dr. Solomon during his time at UG. The value of the award is also $50,000.
At the Berbice campus Convocation, where more than 200 students will graduate on November 17, on the University Square at Tain, the keynote address will be delivered by UG alumna from the Class of 2016, Paediatrician – Dr. Bibi Areefa Alladin-Karan, a Berbician who is a lecturer in the School of Medicine and a practitioner at the Georgetown Public Hospital Corporation.
Meanwhile, the Institute of Distance and Continuing Education, the extra-mural arm of the university, is scheduled to hold its graduation ceremonies for its four centres on November 24 [Georgetown Centre], November 25 [Linden Centre], December 1 [Anna Regina Centre] and December 8 [New Amsterdam Centre].