UG celebrates the life and work of George Simon 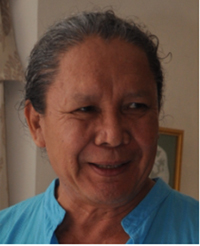 The University of Guyana joins with the artistic community of Guyana and the Caribbean to acknowledge the profound sense of diminution experienced at the loss of painter and anthropologist George Simon, one of the great artists of the contemporary era. The University commiserates with his widow and im- mediate family, recognising at once that this untimely vacuum is equally felt in a much wider circle: the Uni- versity itself, the Guyanese nation and the institutions in the international community among whom his work and influence were significant. With the end of his ever-amazing prolificity, the art and intellectual thought of the twenty-first century are the less.

George Simon was a painter extraordinaire, a conceptualist in artistic theory, an archaeologist, anthro- pologist, researcher and lecturer in whom reposed an innate consciousness shaped by a conceptual vision that drove and made limitless the frontiers of the art of the Amerindian presence in Guyana. A great part of this continuing contribution was realised during his distinguished tenure at the University of Guyana. This part- nership started humbly when he was recruited as a Part-Time Lecturer in Art in the Division of Creative Arts. He later served as a full member of the Faculty of Education and Humanities as Lecturer in the Fine Arts and Research Fellow in the Amerindian Research Unit, being at one time, its Coordinator.

George’s service to the nation was outstanding. He earned degrees in both art and archaeology, but was a student of the legendary Denis Williams, with whom he worked widely in the field and at the Walter Roth Museum of Anthropology and Archaeology, in mapping the pre-history of the Guianas. Most recently, he represented the University of Guyana as part of a team with English-American professor Neil Whitehead in partnership with the University of Wisconsin, the national Department of Culture and the UG, investigating the recently discovered agricultural mounds off the Upper Berbice River, unleashing the mysteries of an an- cient Guyanese community more than 5,000 years old.

That service to nation building, however, was to multiply itself several times in the boundless advance- ments in the field of art. Simon was born in St. Cuthbert’s Mission on the Mahaica River, from where he ben- efited from scholarships organised by priests for his studies in England. But he was to repay that patronage by training and motivating groups of young artists in his native village as well as at the Burrowes School of Art. He organised and led the Lokono Artists who rapidly soared to national prominence at the arrowhead of new developments in a branch of Guyanese art that is older than Columbus, but suffered centuries of colonial sub- mersion before its gradual resurgence in the twentieth century. George Simon was a major protagonist in the rise of Amerindian art in the Caribbean.

The importance of this innovator to Guyanese art is well celebrated. He was a part of that area of the art characterised by intertextuality. The visual arts and literature engage each other in analysis and interpreta- tion of Guyanese society through paintings by Bernadette Persaud, Stanley Greaves which interrogate the works of Martin Carter and Edgar Mittelholzer. Simon’s preoccupations have engaged Wilson Harris and Pauline Melville to reinforce a development that deepened the power of the art of Simon and of Amerindian art, which included excursions into the rainforest, animism, spiritual beliefs, mythology, the landscape, the grotesque and the kanaima. Simon was to probe even further forward with his explorations of shamanism and the mythology of other societies such as Haiti, Chad, and the Sudan; then most recently Mexico and Spain.

This painter and intellectual has made his mark indelibly on the Turkeyen Campus of the University with the famous mural “Palace of the Peacock: Homage to Wilson Harris” (2009) painted jointly with Philbert Gajadhar and Anil Roberts. However, that is but a replica of the impact on the art and consciousness of the nation. The similar stamp he imposed on the Caribbean region is captured in one of his most prominent marks of recognition – the Anthony Sabga Caribbean Award for Excellence which he gained in 2012. The nation honoured him with the Arrow of Achievement (AA). Yet, the power of his art, the infinite breadth of his im- agination, have imposed their influence upon the art of the twenty first century, rendering them an immortal ingredient in the making of humanity.

Public Relations Division
for the Faculty of Education and Humanities
July 24, 2020