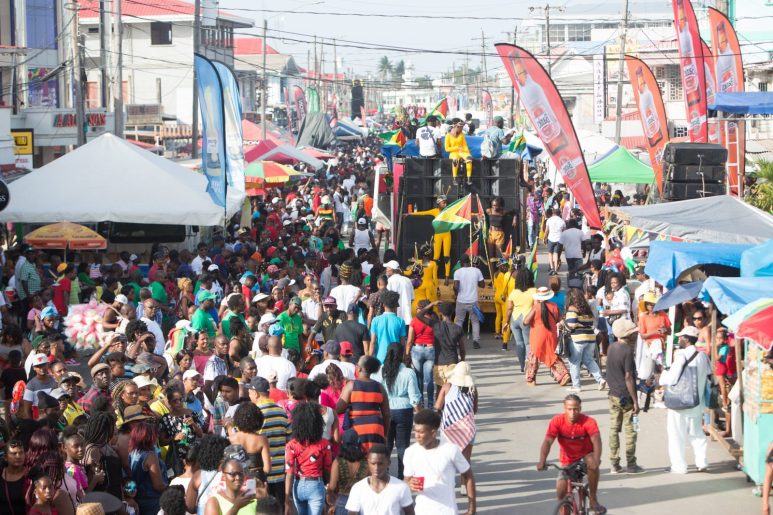 ― Spectators flood streets to revel in the celebrations

Devta Ramroop, President of the University of Guyana Students’ Society (UGSS), united both Tain and Turkeyen campuses in a spectacular patriotic display over the weekend at the Berbice Mashramani celebration.

Students from the main Turkeyen campus joined their peers in Berbice to display true ‘celebration after hard work’. Under the theme “Guardians of the El Dorado”, the students’ society designed and portrayed four breathtaking costumes that symbolised Guyana’s pristine nature. According to Marissa Foster, a student at the Tain Campus, the costumes “remind us that our greenery is beautiful, but gold mines can sometimes be pollutants of nature if we do not be careful”.

Decked in a brightly coloured headdress, Ramroop noted that UGSS sees the wholistic development of students as a cornerstone of the body. Boasting of the turnout of students, she claimed that their presence displays “academic as well as social development”.

Spectators from across the region flooded the streets of New Amsterdam in their numbers to support their fellow citizens. One such person was Fay Worrel, who said while the Ministry of the Presidency’s Department of Social Cohesion, Culture, Youth and Sport was her favourite float, she enjoyed the cultural diversity on display.

“Mashramani means everything to me… It brings back the cultural aspects of the country, and I am very proud of how the country has progressed.” Another, Gem Lyken, applauded this year’s performances, adding that it “was wonderful, bigger and better” as she showcased her dance moves on the parade.

Republic Day this year is being observed under the theme “Celebrate Mash 49 with Victory in Mind”, and it is still being celebrated throughout the many regions.