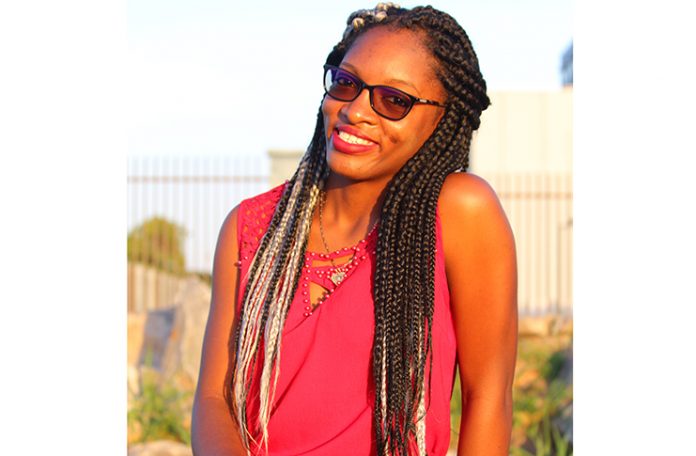 — young Bartican set to graduate from UG with distinction in Economics

AS Tamya Healis anxiously awaits graduation from the University of Guyana (UG) on Saturday, she anticipates her dream to take her hometown, Bartica, to higher heights in terms of development.

This 23-year-old expressed her passion to the Guyana Chronicle while sharing her prolonged years of accomplishments in Bartica. She has been an academic highflier since sitting the National Grade Six Assessment in 2007, emerging as the third best graduating student in Region Seven with 511 marks. She went on to pursue her secondary education at the Three Miles Secondary School, and in 2012, emerged as the best graduating student for Region Seven at the Caribbean Secondary Education Certificate (CSEC), with 11 subjects.

Healis said her next step after her high school graduation became blurred as she had lost her grandmother to cancer, a few days prior to the release of the CSEC results. But after a year of finding herself and consulting persons for advice on the way forward, she finally decided to venture off to UG and read for a degree in Economics.
“I consulted one of my past teachers and she suggested I try Economics. At that point I wasn’t 100 per cent into it, but I felt like this is what I needed to do. So I came to UG and at first it was a battle, after all Economics is one of the toughest programmes at UG,” she said.

UG STRUGGLES
Healis said her maintenance at UG became quite a hassle, that it forced her to juggle her studies with multiple side jobs to sustain herself throughout the four years.
“As you know, a girl has needs and not everything your parents can provide for you, so that’s when I started venturing off into part-time jobs so as to be able to maintain myself. The first one I did was selling honey roasted nuts to my classmates, which was very profitable. It even grew and ended up at the canteen, so I had a large customer base. And that’s how most of my personal bills got paid off,” the young woman shared.

“But after I grew, I moved on to other things. I was actually asked to tutor one of the courses under the business management department (Computer Studies). So I eventually did away with the honey roasted business and focused more on the tutoring. And that lasted throughout my university life and still is ongoing for a two-year period,” she added.
In addition to the tutoring, because she always had a love for nature and taking pictures, Healis shared that she grew into the habit of capturing scenes and sharing those captures on her social media platforms.

This grabbed the attention of her fan base on social media, to the extent that persons started asking her why she hasn’t tried photography. The constant confrontation of the question lead her to take on the challenge, so she saved her tutoring money and purchased a professional camera and started photography as another part-time job.

“Balancing those two jobs and studies was quite challenging, especially coming down to my final year. I had a lot of times wanted to give up. But there was always that inner voice that said ‘keep going, you’re on your last lap’. Now here I am today, awaiting graduation day where I’ll graduate with a distinction in Economics. So my four years of rough road paid off,” she said with a glistening smile.

WHERE IT ALL STARTED
Though losing sight of her lifelong goal after her grandmother’s death, Healis said that her tertiary achievements were not coincidental. In fact, it has always been her childhood dream and she knew all along what she will become one day.

“From a very tender age, it wasn’t clear as day, but I knew I wanted to move Bartica forward. Because knowing that [in] Region Seven most persons vote for the green party and growing up, we were under the leadership of the red party, and we were starved in many areas under their leadership. And seeing Bartica being constrained for so many years, and knowing its potential, that’s what started to drive me.

I kept telling myself ‘I gotta do well in school, I gotta make that step to make this place better’,” she said.
The young woman shared that what she really loves about Bartica, is its potential. And knowing that under bad management, or persons who do not have that vision, the potential can be lost, she said that it motivates her to be educated and take up these roles so that she can make her hometown a better place.

PLANS AFTER GRADUATION
After graduation on Saturday, Healis said her next step is to work along with leaders in her hometown to give it the boost it so deserves.

“Seeing that Bartica is on the verge of becoming a tourist destination, I believe that everyone in Bartica needs to be on that very page, otherwise the goal will fail. The people are the ones who have to ensure that it gets to that point and be maintained because their actions play an integral role in the development and having it being sustained,” she said
She added that sensitisation through seminars, workshops and outreach, among others, are most definitely important to ensure that everyone knows the role they have to play in development.

“Leaders are the most powerful in a community, I am by no means conforming to a specific group of leaders, I am however, conforming to being a liaison individual with the leaders, to aid as a spokesperson to assist in the execution of pushing our town on the global map,” she said emphatically.