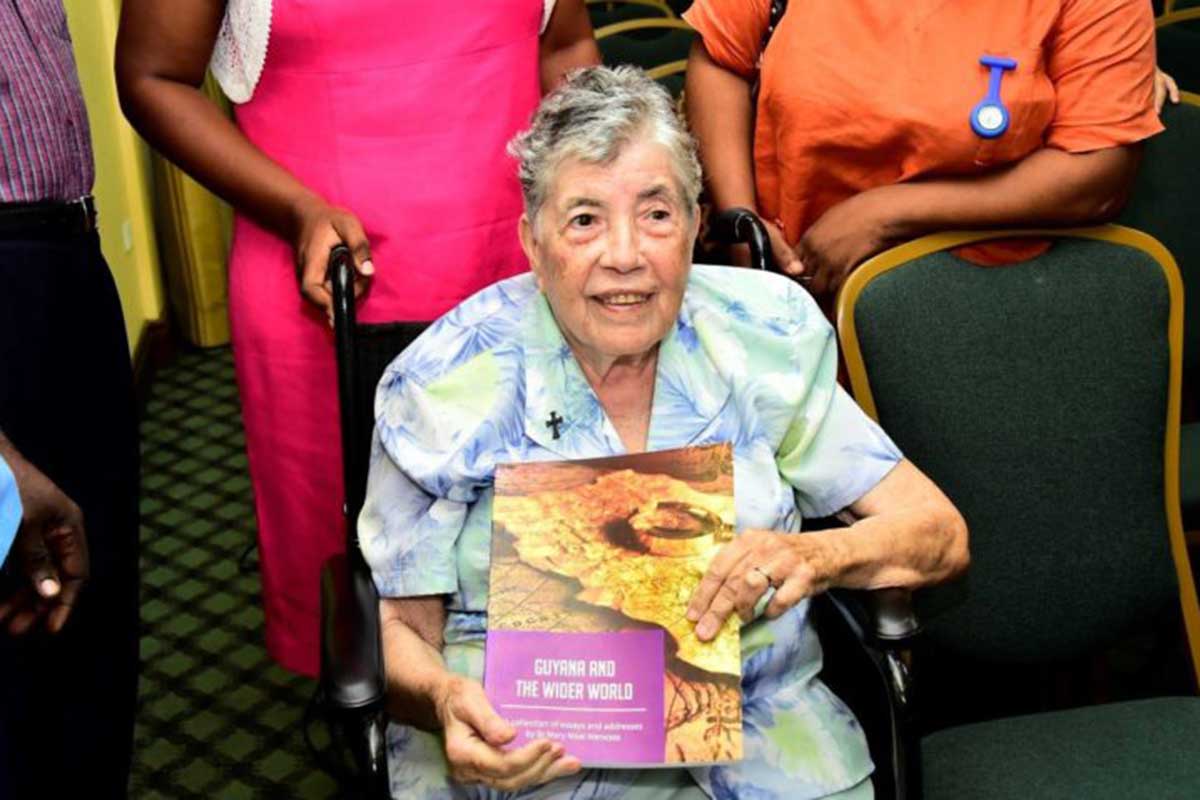 Georgetown, Guyana – (May 31, 2017) President David Granger, last evening, paid homage to his former history lecturer at the University of Guyana (UG), distinguished historian and humanitarian, Sister Mary Noel Menezes, who at age 87, launched her new book entitled ‘Guyana and the Wider World’, which features a collection of her essays and addresses. Topics covered in the book include education, Christianity, Guyana’s Indigenous Peoples and the Guyana-Venezuela border controversy. All proceeds from the sale of the book will be donated to the Mercy Boy’s Home. Publisher, Mr. Vic Insanally presented a cheque for $100,000 in advance in anticipation of expected sales to Sister Celine Marie of the Home.

In his remarks at the launching ceremony, which was held at Cara Lodge, President Granger spoke fondly of his interactions with Sister Menezes, describing her as a meticulous and dedicated teacher, who gave her students a granular method of instruction, particularly as it relates to research. He told the gathering that Sister Menezes published a book called ‘A guide to historical research’ and later penned another book entitled ‘How to do better research’.

“This meant that once you passed through her hands you had to know how to do research and sometimes even after you have grown up and become an ‘old boy’, when you write something you would ask yourself, would Sister approve of this? This book that is being launched here gives you an idea of Sister’s intellect, the range of her interests and the intensity and passion with which she wrote. Students who were taught by her were made to think,” President Granger said.

He noted that Sister Menezes’ students will never forget her because she helped them to develop their intellectual foundation and this is quite evident in their accomplishments later in life.  Past students include former UG Vice Chancellor, Dr. James Rose, former Registrar, Dr. David Chanderballi, former Acting Chancellor of the Judiciary, Mr. Carl Singh, former Dean of the School of Education and Humanities, Mr. Tota Mangar, UG’s first Master’s graduate, Dr. Basdeo Mangru and, of course, President Granger.

Another close friend of Sister Menezes, Dr. Nigel Gravesande said that quite apart from her academic achievements, she led a life of faith to God and dedication to the service mankind. “Sister Noel combined a life of prayer with a life of active ministry both at the UG and with her pastoral work…Her achievements as an outstanding educator did not deflect her from her real mission in life. She trained from her teens and committed her heart and her soul to serving the disadvantaged. Her exemplary service to the needy is recorded in the writings of several journalists and publications and articulated by many leading regional and international academics,” he said.

Sister Menezes’ friend and colleague, Dr. Winston McGowan, who edited the book, described her as an observant and militant individual who held very strong views on a wide range of issues and said that this book, which documents some of those views, is worth being added to individual library collections. “The book consists mainly of articles and addresses that Sister made about private groups and individuals, some of whose contributions are of an academic nature,” he said.

It also consists of section on the Amerindians, the rise of the Portuguese, an account of Marian’s Academy, a historical outline of UG and biographical sketches of Albert Raymond Forbes Webber, whose contribution to Guyana was multi-faceted, Ms. Elsa Gouveia an iconic Guyanese historian and German explorer, Sir Robert Hermann Schomburgk.

Sister Menezes who was born in 1930, is a nun, Emeritus Professor of History, philanthropist, author and recipient of the country’s second highest National Award, the Order of Roraima as well as the Golden Arrow of Achievement. She also received an Honorary Doctorate of Laws Degree from the University of the West Indies. She joined Religious Sisters of Mercy at the age of 17.