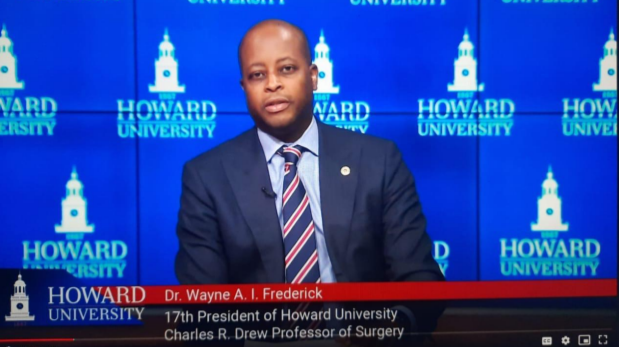 The University of Guyana hosted its second in a series of virtual Convocation ceremonies on Saturday, March 20th which saw another batch of graduates; 207 from the College of Medical Science and 336 from the Faculty of Natural Sciences, now being added to the local work force. This is in addition to the 556 students - 293 from the Faculty of Engineering and Technology, 51 from the Faculty of Agriculture and Forestry and 212 from the School of Entrepreneurship and Business Innovation (SEBI) – who had graduated the previous evening (Friday March 19th). Close to 2,500 students are set to graduate from the University’s Turkeyen and Berbice Campuses and from the Institute of Distance and Continuing Education Programmes. There will be two more graduation ceremonies this Friday and Saturday, March 26th and 27th. The public is invited to view the proceedings at https://www.facebook.com/uniofguyana/. In a powerful and inspirational speech on Saturday evening, Howard University President Dr. Wayne A. I Frederick, a distinguished scholar, cancer surgeon and administrator, told the graduates that now that they have qualified themselves in the various fields of Science and medicine, there is an ample opportunity for them to help shape the world as they see fit.

“As you move forward in your careers, may you remember the power of science as a force of social good and your ability to influence the world around you when you embrace your full potential as a scientist,” he said. Frederick is the first Black and Caribbean President of the 228-year-old Howard University. Howard is the University which also recently fielded the first woman and woman of colour as US Vice President, Kamala Harris. President Frederick reminded the graduates that they are patrons and torch bearers of science, and it is up to them to “banish the darkness with your light and lead us forward to days of greater, global health and prosperity.” He noted that part of the graduates’ responsibility would be to ensure that science continues to lead. “Where there is myth you must counter it with fact. Where there is misinformation, you must counter it with fact. Where there is a culture of denialism, you must again counter it with fact. In some ways your role is simple, just tell the truth. Find the truth and promote it.” The distinguished author observed that throughout the Covid-19 pandemic, people in all parts of the world allowed their actions to be governed by forces other than the truth, they acted based on emotion and fear, anger and in some cases intolerance. He expressed that when COVID 19 is finally subdued, “it will be thanks to science that we prevailed”. According to Dr Frederick, in a world that moves at the pace of ours and where questions demand answers before answers are ready to be given, setbacks are guaranteed to occur. But he insisted that adherence to science is a guarantor that the balance of our social progress will be forward rather than backward. He reasoned that the graduates are the arbitrators of science, as a result they are the trusted messengers who can deliver the truth to the people. On this basis, he urged them to use that standing in society to do the most good when they can in the way it is most natural to their character, and befitting of their passions.

Additionally, the accomplished academician reminded the graduates that their role as men and women will never be truly simple, adding that they will always have to look beyond the science and what purpose the science is directed towards. “It is not enough to conduct a research or write a study and leave the impacts of that study to other people…It is good to be passionate about your work, vital even, but I want you to be equally passionate about its purpose. While you’re all students of the sciences, I hope you all become students of the world. Because within the power of science and having that at your disposal, you have the capacity to change the world around you,” he added. Dr Frederick further pointed out that science can also generate new ways to provide health care. He explained that while the pandemic revealed how unequal the global healthcare infrastructure is, and has been, we can use this critical, inflection point to ensure that all people regardless of their race, or where they happen to live can access the care they need, when they need it the most. “Whether it’s through telemedicine, mobile health care providers, strategically rethinking and redeploying our existing health care system. Or some other innovation to be developed, science has a role to play in refashioning this critical part of our society,” he argued. Dr. Frederick was appointed the Seventeenth President of Howard University in 2014. He previously served as Provost and Chief Academic Officer. Most recently, the Howard University Board of Trustees selected him to serve as the distinguished Charles R. Drew Professor of Surgery. A distinguished scholar and administrator, Dr. Frederick has advanced Howard University's commitment to student opportunity, academic innovation, public service, and fiscal stability. Early in his tenure as president, Dr. Frederick pursued initiatives to streamline and strengthen university operations. He has overseen a series of reform efforts, including the expansion of academic offerings, establishing innovative programs to support student success and the modernization of university facilities.

The University of Guyana is the 58th year state University of Guyana. It offers 136 programmes in over 60 disciplines online and face-to-face in 8 campuses across Guyana. With a student population of now 10,000, UG has provided education, learning and research for over 50,000 alumni. The mission of the University is to discover, generate, disseminate and apply knowledge of the highest standard for the service of the community, the nation and of all mankind within an atmosphere of academic freedom that allows for free and critical inquiry. UG’s forward thinking Blueprint 2040 is currently setting the course for the University’s future design and institutional response to the changing needs of Guyana.