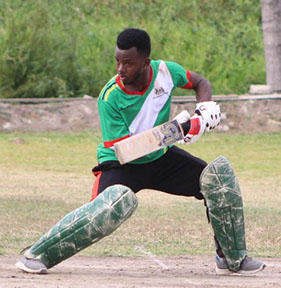 A brilliant all-round performance by Andre Gibson sealed an intense four-wicket win for the University of Guyana (UG) over GNIC in the final round of the New Building Society (NBS) Second Division 40-over tournament at GNIC on Saturday.

Gibson, a former Demerara Cricket Club (DCC) player, snared 4-50 and recorded an unbeaten half-century to see his new club over the line.

As the script went, GNIC after winning the toss and electing to bat, were dismissed for 202 with the burly right-handed Jermaine Grosvenor leading the way with an attractive innings of 61.

Gibson’s penetrative medium pace did the bulk of the damage for the students as no other batsman reached 30, all failing to capitalise on the small side-boundaries at the GNIC facility.

The seamer was supported by Yakini Favorite (2-26) and Devon Paul (2-37) who shared four wickets.

UG in response reached their target with six wickets down. The success run-chase was spearheaded by Gibson who carved out an unbeaten 53 to carry his side over the line. He was supported by Mahendra Persaud (33); Shane Browne (3-43) was the most successful bowler for the hosts.

The result of the match had no bearing on the semi-final matchups since The Muslim Youth Organisation (MYO), Everest Cricket Club (ECC), Police Sports Club (PSC) and the Georgetown Cricket Club (GCC) all advanced.