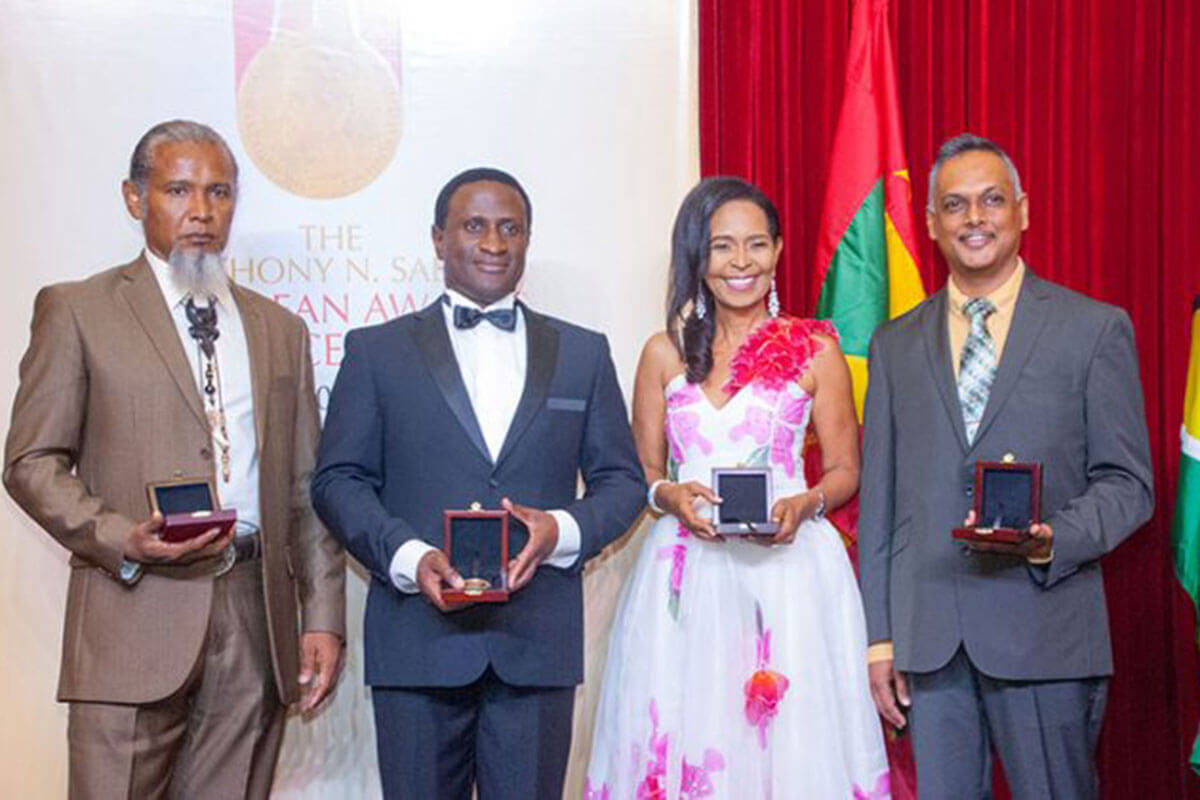 A CALL was made on Saturday evening for the Caribbean’s rich talent and expertise across various sectors to be cherished and promoted, when the 2017 laureates of the Anthony N Sabga Caribbean Awards for Excellence were recognised for their outstanding contribution to the Region.

They were awarded at a lavish ceremony at the Marriott Hotel, Kingston, Georgetown. Chairman of the Regional Eminent Persons Panel, Sir Shridath Ramphal and Norman Sabga, son of the late Anthony N Sabga, presented the awards to the laureates. The former patron passed away recently after a period of illness. Speaking to an audience which included President David Granger, Ministers of Government and members of the diplomatic corps, Minister of Indigenous People’s Affairs Sydney Allicock, a 2010 laureate, told the gathering that he has benefitted immensely from the countless opportunities which came his way. He said he looked for solutions to many issues, by using the guidance he has achieved from his parents.

Allicock said the award caused him to be able to meet on many occasions with persons who possess the willingness to provide support to ideas, to create opportunities, including job opportunities. According to the Indigenous People’s Affairs Minister, the award provided him an opportunity for exposure here and overseas “in a way that gave me the encouragement to keep working towards the identity of our indigenous people, our Guyanese nation and even to join hands with our Caribbean brothers and sisters.” He said the rich talents in the Region should be preserved and promoted. Like many others who spoke, Allicock paid tribute to the late Anthony Sabga, noting that the businessman made it possible for him to achieve much of his accomplishments, personally and professionally.

Sir Shridath, who spoke of the awards, noted that they serves the entire Region. The awards have recognised some of the outstanding talents in the Region. “If in any year we fail to identify in any category, the fault is within the system of detection,” Sir Shridath said, noting that the panel will continue to search for those who exemplify the characteristics for being awarded. He also paid tribute to the late Sabga. This year’s ceremony was the first to be held outside of Trinidad and Tobago, the base of the ANSA McAl group. The awards were initiated in 2005 in the twin island republic, and to date, 31 exceptional individuals have been recognised by the award panel. According to the organiser, one of the main reasons for the event being hosted in Georgetown lies in the recognition that nine Guyanese have been the recipients of the awards. In addition, it was noted that another reason for the hosting lies in the regional group having significant business interests in the Land of Many Waters.