“If I could do it all over again, I would still choose UG,” says retiree who served the nation’s apex University for over four decades

“If I could do it all over again, I would still choose UG,” says retiree who served the nation’s apex University for over four decades

“I was privileged to have been employed by the highest tertiary institution of Guyana and if I could do it all over again I would still choose UG without any hesitation,” said Ms Esther Overton-Ifill, a retiree who had served the University of Guyana for over four decades, climbing through the ranks of being a Clerk/Typist to Administrative Officer up to the point of her retirement a few weeks ago.

On August 12, 2022, the UG’s Registry Department hosted a beautiful ceremony to honour Ms Overton-Ifill’s contributions to Guyana’s apex University.  The retirement celebration was held at the UG’s School of Entrepreneurship and Business Innovation (SEBI) building, Turkeyen Campus, and saw many of Ms Overton-Ifill’s past and present colleagues hailing her as a true professional who was always dedicated to her job. 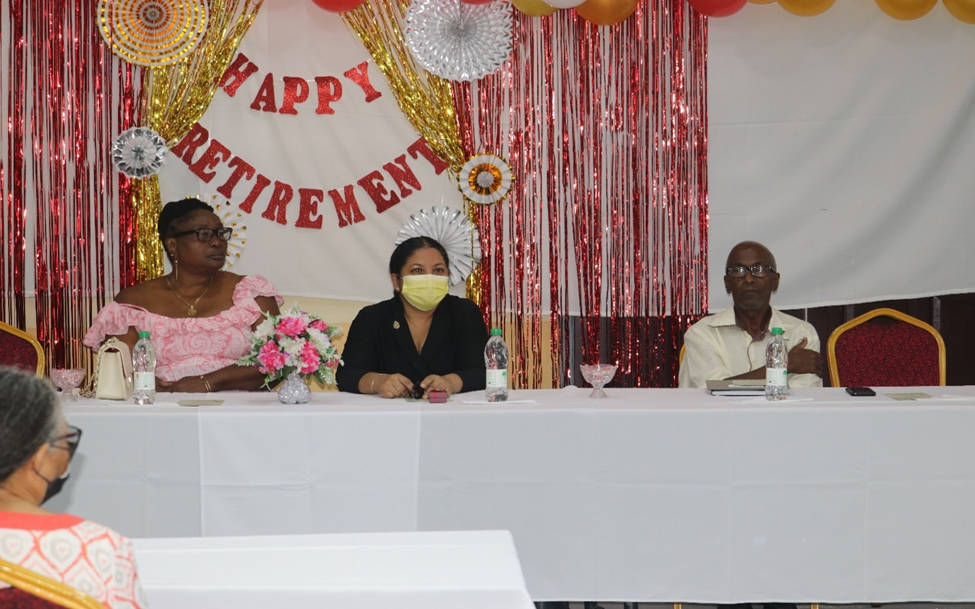 University of Guyana’s Vice-Chancellor, XI, Prof. Paloma Mohamed expressed heartfelt thanks to Ms Overton-Ifill for her long and dedicated service to the University and wished her the very best in all her future endeavours. The VC noted that serving the University for over forty years is quite a feat which must be recognised and honoured.

Adding his words of appreciation, the Registrar, Dr Nigel Gravesande, Ms Overton-Ifill’s last immediate superior, lauded her excellent work ethic, noting that she was always approachable, courteous and helpful and had a good working relationship with her colleagues.

He pointed out that for some organisations, including UG, once an employee resigns, an interview is done to find out the reason/s for the person leaving, however, he strongly believes that research should also be done to find out why persons stay as in the case of Ms Overton-Ifill. “I believe today is historic because not too often an employee spends their entire career in one place - over 4 decades. I do believe that we can benefit by starting to find out why people stay and what are the propelling factors that allow the University’s employees to stay,” Dr Gravesande underlined.

The Registrar noted that as a student of history, he sought to engage the Personnel Department over the past twenty years to find out what percentage of UG’s employees stayed on the job for many years. He added that many would be surprised to know that 94% of persons recruited for the first time stay on in various capacities at the University of Guyana.

Deputy Registrar of the University of Guyana, Dr Theodosius Velloza, who chaired the proceedings, also read her citation detailing her journey as an employee at the University.

In October 1980, Ms Overton-Ifill joined the service of the University as a Clerk/Typist and was assigned to the Examinations Division. She progressively moved through the Secretarial/Administrative stream as Secretary and Administrative Assistant with exposures to the functions of the University of Guyana Students’ Society, Public Relations Division, School of Professional Development, Institute of Distance and Continuing Education, Office of the Deputy Vice-Chancellor, Faculties of Social Sciences and Technology and other Sections of the Registry.

Her elevation to the UA Non-Academic level in the post of Administrative Officer I in 2010 is attributed to the acquisition of the relevant qualification as well as a track record of good performance and dedication to duty.  In November 2013, she was promoted to Administrative Officer II.  She continued to serve in this capacity in the Registry until her retirement.

It should be noted that this staff member had also given support to the institution in its Sports programme by serving as sports organiser, chaperon, and team manager for a UG team which competed in an Inter-University cricket tournament held in the Caribbean Islands.

Ms Overton-Ifill was also an avid athlete who participated and won several shot-put competitions for the University.

Ms Esther Overton-Ifill (standing, back row, extreme left) on a Barbados field trip with the UG sports team in 2011

Former Registrar of the University of Guyana, Mr Vincent Alexander thanked Ms Overton-Ifill for her dedicated service to the University and officially welcomed her to the “retirement club.”

In her response, Ms Overton-Ifill, said she was extremely humble and honoured to be showered with such recognition and thanked the organisers for honouring her in this special way. She noted that it was a privilege to have served UG for over forty years and will certainly miss all her colleagues, some of whom will remain her life-long friends.

When asked what motivated her to stay with the university for such a long time she responded: “I am privileged to have been employed by the highest tertiary institution of Guyana and if I were to do it all over again I would choose UG.  I’ve met some persons who have impacted my life positively and I will always cherish them.  Throughout my stay, I didn’t count the years and didn’t even realise that they had flown by as I was so engrossed in performing my duties and ensuring that I gave of my best.  And they were my best years- from a teen to a grandmother of five.”

While she is yet to decide her next major move following her decades of service to the University, as of now, Mr Overton-Ifill, who hails from Plaisance, East Coast Demerara, hopes to take it one day at a time “spending more time with my family and doing whatever makes me happy.”

Many have expressed the view that the University is very fortunate to have such dedicated employees who work very hard to ensure that students who enter the halls of the institution are supported in every way possible to be successful in their academic endeavours.

The University’s administration has been working diligently over the years in achieving students and staff success; which is an integral part of the University’s Blueprint 2040 Goals.

(Feature by the Department of Events, Conferences and Communication (DECC), Office of the Vice-Chancellor, XI, University of Guyana)

The University of Guyana now in its 59th year was founded in October 1963. “UG” as it is fondly referred to offers 150 programmes in over 60 disciplines in online, face-to-face or blended formats. UG delivers in a Guyana based system across eight campuses. It is the largest, oldest, most advanced and only state University in Guyana with a student population of over 10,000 “UG” has provided education, training and research for over 50,000 alumni over its 59-year history. UG’s national and global impact and footprint is significant. Its graduates have risen to populate the commanding heights of national, regional and international organizations of repute in over 150 different disciplines. The mission of the University is to discover, generate, disseminate and apply knowledge of the highest standard for the service of the community, the nation, and of all mankind within an atmosphere of academic freedom, innovation and universal respect.

UG's forward-thinking Blueprint 2040 is currently setting the course for the University's future design and institutional response to the changing needs of Guyana, the region and world. UG will celebrate its 60th anniversary in 2023 and is stepping up its focus on becoming one of the leading and most sought-after educational institutions in the world for both staff and students.