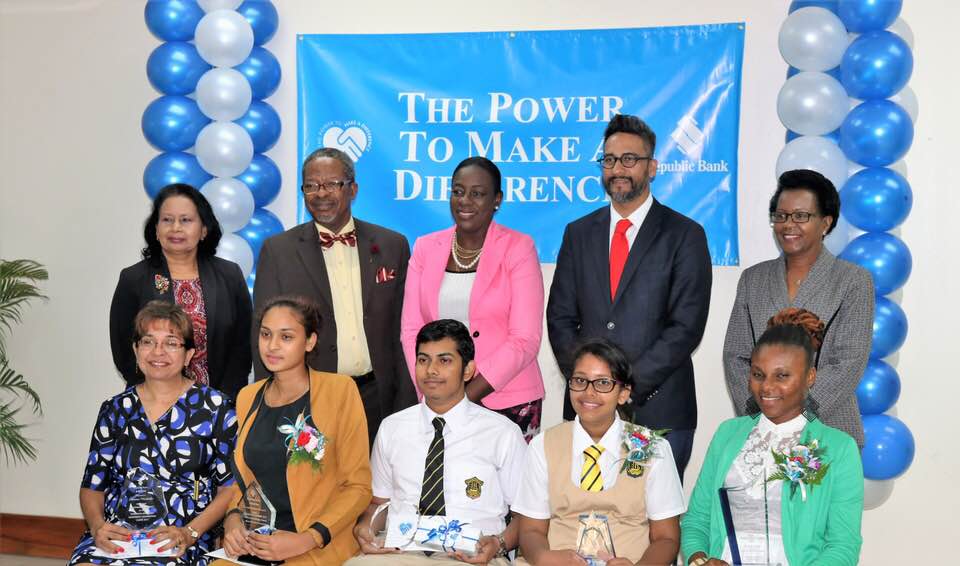 “One child, one teacher, one book, one pen can change the world”, was the quote of encouragement from the University of Guyana’s Vice-Chancellor, Ivelaw Griffith to the best performers at national examinations in the country, at Republic Bank (Guyana) Limited’s Power to Make A Difference Academic Achievement Awards last Wednesday.

The awardees were best performer at the National Grade Six Assessment (NGSA), Saskia Twahir; best performer at CSEC, Michael Bhopaul; best performer at CAPE, Shannon Woodroffe; best graduating students from the University of Guyana with a Bachelor’s Degree in the Faculty of Social Sciences, Elsie Harry and Diploma in Banking and Finance, Shania Annirood.

Among those in attendance at the ceremony at the Head Office on New Market Street were the Minister of Education, Nicolette Henry and Superintendent of Examinations of the Ministry of Education, Saudia Kadir.

In his address, Richard Sammy, the Managing Director of Republic Bank (Guyana) stated that the organization continues its tradition of supporting and rewarding excellence in education through its annual partnership with the Ministry of Education and the University of Guyana. The Bank’s social investment programme `Power To Make A Difference’ is an initiative to serve, honour, encourage and empower Guyana’s youth towards a life and future of excellence, he said. He further stated that the bank tracks the progress of the awardees and made special mention of this year’s CSEC Awardee, Michael Bhopaul who, five years ago received the award for his performance at the NGSA.

Griffith shared with the awardees a quote from the youngest Nobel Peace Prize laureate Malala Yousafzai, “One child, one teacher, one book, one pen can change the world.” Griffith then said “Nothing you have achieved so far you have done by yourself, as you celebrate your achievements, remember who your giants were because you have been standing on the shoulders of giants. Some of those giants may be parents, who never had a chance to go where you have gone like Queen’s College or the University of Guyana. Some of those giants may be your grandmother, grandfather, teachers, counselors, priests, pastors, pandits.”