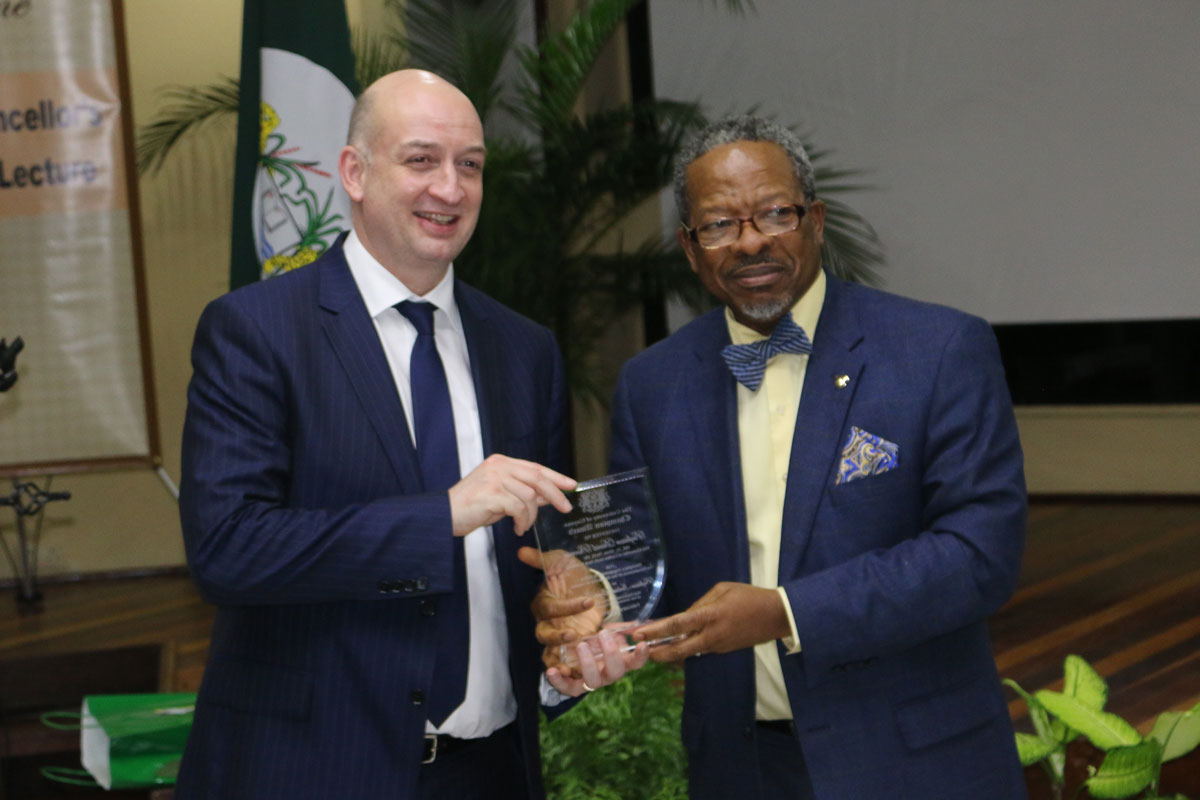 The visitors engaged the Committee of Deans on collaboration for research and teaching-learning enhancement. Areas identified for collaboration are agriculture, bio-diversity, the health sciences, humanities and the soon-to-be-established School of Entrepreneurship and Business Innovation at UG. Meetings were held with students and faculty/staff at the University’s Institute for Distance and Continuing Education in New Amsterdam and the Berbice Campus at Tain, Corentyne.

The party also held discussions with the Hon. Dr Rupert Roopnarine, Minister of Education, H.E. Mr Greg Quinn, the British High Commissioner, and had a working lunch with civic leaders of New Amsterdam and Regions 5 and 6 at State House in New Amsterdam. The opportunity was taken to share developments at UG and further strengthen support for the University’s renaissance.

One highlight of the visit was the Inaugural Vice-Chancellor’s Renaissance Lecture, held at the Turkeyen Campus on February 2. Professor Phoenix spoke on “The Importance of the Entrepreneurial University for Nation-Building”, an issue that is a priority for the University’s Administration as it seeks to broaden its funding base beyond the government subvention and tuition/fees to include planned giving, merchandising, public-private partnerships, investments, grants and contracts. Grounded in his experience in a similar revitalisation of LSBU since he assumed office three years ago, Professor Phoenix’s ideas were deeply philosophical, informed by the latest research and most importantly practical, helping the audience to assess and analyse UG’s position.

Following the lecture, the two Vice-Chancellors took the opportunity to sign an agreement indicating their intention to work quickly to define specific implementation plans for the areas discussed. Vice- Chancellor Phoenix was also presented with the first University of Guyana Champion Award by Vice- Chancellor Griffith, for his continued interest in and support for UG and for his exemplary engagement in aiding the renaissance of the University of Guyana.

Meanwhile, the second Vice Chancellor's Lecture is scheduled for March 16. It will be delivered by Mr Ian Randle, Chairman of the Jamaica-based Ian Randle Publishers (IRP) on the subject "The Publishing Pillar of the Renaissance Bridge: Why, What, How". The Lecture will also provide the occasion for Mr Randle and Vice-Chancellor Griffith to sign a Memorandum of Understanding establishing a UG Press as an imprint of IRP. Pursuit of the UG Press is an integral part of Vice-Chancellor Griffith's efforts to stimulate and support research and scholarship at UG. Another key initiative in this respect is the recent establishment of the Vice-Chancellor's Research Support Fund, with GUY $1 million from private fund- raising.

Professor David Andrew Phoenix, O.B.E., DL, DUniv, FAcSS, DSc is the Vice Chancellor of London South Bank University, Chair of million+, and a member of the HEFCE Strategic Committee for Teaching Quality and the Student Experience. He was elected to Fellowship of the Royal College of Physicians (Edinburgh) for his contribution to medical research and education and recognized as an Academician by the Academy of Social Sciences for his work in areas linked to educational policy. He currently represents Universities UK on the UK Performance Indicator Steering Group.

In 2015 the prime minister appointed him as a trustee of the Science Museum Group. He is also a trustee of Universities UK and a Director of National Centre for Universities and Business. With over 250 publications, Professor Phoenix remains a visiting professor at Kings College London and Sichuan University, China, as well as a Fellow of the Royal Society of Chemistry, The Society of Biology, The Institute of Mathematics and Its Applications and the Royal Society of Medicine. Through these later bodies he has engaged in a range of discussions regarding the skills agenda, especially related to employer requirements. In 2010 he was made an Officer of the Most Excellent Order of the British Empire for services to Science and Higher Education and appointed as a Deputy Lieutenant of Greater London in 2015.

UG IN BRIEF
With a current enrollment of some 8,000 students, The University of Guyana (UG) has graduated more than 20,000 students who have gone on to successful careers locally, regionally and internationally. The University is also a major contributor to the national economy and to business and industry. Established in 1963 on a part-time basis with shared space at Queens College, UG moved to its own campus at Turkeyen in 1970 and expanded in 2000 with the addition of the Tain Campus. It now offers more than 60 Under- graduate and Post-graduate Programmes including the Natural Sciences, Engineering, Environmental Studies, Forestry, Urban Planning and Management, Tourism Studies, Education, Creative Arts, Economics, Law, Medicine, Optometry and Nursing. Several online programmes are available and The UG also offers extra-mural classes at four locations through its Institute of Distance and Continuing Education (IDCE). The UG also offers the opportunity for student engagement in debating, sports, and cultural, religious and professional activities.