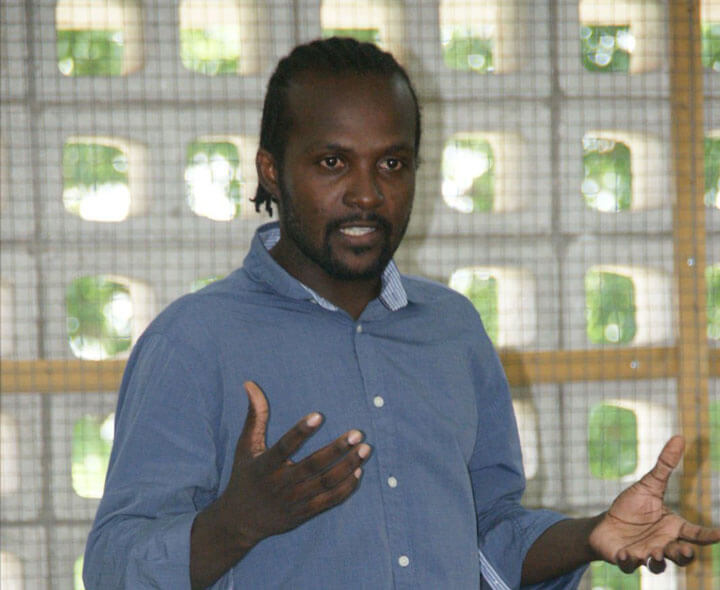 The work I do now is carried out so that my son can benefit from it in a number of ways, intellectually and instinctually, in the long run. Dr. Troy Thomas, Director of Undergraduate Research

Born in 1981 at the Wakenaam Hospital on the small island in the mighty Essequibo River, Dr Troy Thomas spent his childhood traversing between Wakenaam and the Essequibo Coast where he was he garnered his secondary education at the Wakenaam Secondary School. He was birthed by Mr Harold Thomas, who was a farmer, and Ms Pamela Thomas who was a teacher at the secondary school in the area. Actually, he came as companionment to an older brother and a young sister. During his childhood, Dr Thomas shared with happiness bursting through his voice, that even though electricity and electronic devices were not prevalent in his home, he chose to engage in other meaningful mindboggling activities which helped to steer him onto the path he is on now. He and his siblings would often enjoy the great outdoors of the countryside despite the disagreements that came with craftit. Moreover, after this period the entire family relocated to Georgetown, Guyana.

As his childhood progressed and young adulthood graced him, Dr Thomas offered that he never had any aspirations rooted in any definitive career path although his secondary level grades were excellent and should have prompted him to become career oriented in a single specific field. He shared that, “growing up in contemporary Guyana, like many people living in these areas, has now made me realize the thought of university rarely crossed my mind, simply because it seemed so far off.” He continued further that, “focusing on the broader picture of an unfortunate reality in many communities where the thought of higher education seems somewhat distant or not there at all.” However, throughout his youthful days, there were a number of people he admired and gained inspiration from to grow and become prosperous in life. These people were his church pastors, elders in the village and a particular teacher at his school named Dennis Nichols. Mr Nichols, a current columnist for Kaieteur News, was a newly recruited teacher at Dr Thomas’ secondary school who had piqued his interest and motivated him to do poetry, an art he was quite fond of back in the day.

According to Dr Thomas, he would describe himself as diligent, introverted and a good listener. He explained that he is generally a person who works given, whether it requires him to be the last one leaving the workroom. Also, he is an introvert who does not share the abundance of attention given to an extrovert. Certainly, when someone who is boisterous, outgoing and free-spirited enters a room, they command all of the attention. Dr Thomas shared he is someone who would usually not enter a room crowded with chattering people and blatantly silence them while commanding their utmost attention; what he might do is converse with a particular group in that room. An excellent listening ability is a trait of introversion Dr Thomas also possesses. He mentioned that he always pays keen attention to what other people are saying; even if it interrupts his gratification to something else, he would let them speak and intently analyze what they have to say, whether the spoken content is of substance or not.

Furthermore, after graduating from secondary school and spending a considerable amount of time in Georgetown, he returned to Wakenaam where he gave his teaching skills to the secondary school. Later, Dr Thomas went on to enhance his academic qualifications in Secondary Mathematics at the Cyril Potter College of Education and abroad. In addition, a former principal named Ms Savatri Balbahadur, who had always held him in her best of interests, played a role in his program of study at the University of Guyana. As a result, he chose the Mathematics program , which he later graduated from with a Bachelor of Science Degree (BSc), while copping the Best Graduating Mathematics Student award.

Currently, Dr Thomas is the Director of the Undergraduate Research Program at the University of Guyana. He relayed that, “this entails crafting a vision, not individually but holistically, with the Vice Chancellor and other members of his department, to come up with a strategy of how they are going to function and implement an effective undergraduate program.” Dr Thomas added that since all the University’s faculties and programs are inclusive in this program, the collective involvement constitutes to some amount of complexity for it aims to include a variety of aspects. According to Dr Thomas, “the complexity arises when we have to come up with a plan that seamlessly integrates different aspects of various programs, which includes shaping themes departments can incorporate in the curriculums.” Additionally, he noted that while the multifaceted nature of the program and its complexity is inevitable, at the same time, it affords the crafters an opportunity to achieve new goals and objectives not existent and to help to improve undergraduate program results from over the years. Also, Dr Thomas is the current president of the Transparency Institute Guyana Incorporated which he noted “looks at transparency, accountability and corruption in the Guyanese society, and keeping track of what is going on in the government and private sector to be able to initiate appropriate change in that regard.”

Consequently, Dr Thomas has academic experiences spanning across various fields of study such as his involvement in the newly crafted Public Health Program in the Health Sciences faculty on the university’s campus, and he has also cooperated with the Computer Science and Biology departments at the university, serving in the capacity of a supervisor for graduate research. He has supervised other research at the Commonwealth MBA program.

Apart from being academically oriented, Dr Thomas spoke about what he deems as enjoyment. He is married and has a son who is approximately two and half years old, whom he aims to be a great father to. In respect to what he does for relaxation, hobbies are sort of a far-off thought for him. In the past, Dr Thomas shared with elation, he enjoyed playing cricket, writing poetry, singing and going to gym. However, presently all of his enjoyable moments revolve around doing work and reading that work in his spared time to perfect it.

At this moment in his life, Dr Thomas stated he gains some level of enjoyment in the academic work that he does and the motivating drive that in the near future it would make him relevant any part of the world. He explained that his aim of all his research work “is not be recognized on a national and regional aspect only but rather to recognized in a reputable manner any part of the world [he] journeys to.” In addition, he immerses himself in his work to produce his best with hopes that one day when his son is old enough to understand the world and its intricate patterns, he will appreciate all of his father’s researches and academic papers. According to Dr Thomas, “the work I do now is carried out so that my son can benefit from it in a number of ways intellectually and instinctually in the long run.”

Without a doubt, Dr Troy Thomas has paved an academic path for many young Guyanese to pursue a career in Mathematics. He is the epitome of an individual who realized what he wanted to achieve in his life, though not in his younger days, but nonetheless he assiduously worked toward what he wanted to accomplish choosing not to stop at no hindrance in life’s path.

Many of his past and present students, he shared, can attest to the fact that he has significantly impacted their lives with the mathematical and other educational knowledge he has imparted onto them. As he continues onward in his academic adventure, the thought of what follows plagues one’s mind as assurance runs deep he will definitely deliver an exceptional work to give him the international distinctiveness that can be engrained in the history encyclopedias.